The Works of Tetsuya Komuro （小室哲哉） 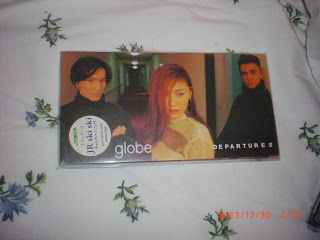 Let me start off with the official Wikipedia intro for the fellow:

"Tetsuya Komuro (小室哲哉 Komuro Tetsuya?), born November 27, 1958 in Fuchu, Tokyo, Japan, also known as TK, is a Japanese musician, singer-songwriter, composer and record producer. He is recognized as the most successful producer in Japanese music history and introduced dance music to the Japanese mainstream. He was also a former owner of the disco Velfarre located in Roppongi, Tokyo. He is widely regarded as one of the most influential figures in pop throughout the 1990s."

Pretty good result for a guy who, as a kid, sold off his violin, guitar and electone without his family's permission to get a Roland SH1000 synthesizer for over 160,000 yen (according to the J-Wiki article). He knew where he wanted to go in music. Not sure I wanted to be in his house when his family did find out, though.

I did not know about his ownership of Velfarre, but with the help of a well-connected student, she was able to get a small bunch of us teachers and students into the happening nightclub years ago on a Saturday night. It wasn't quite as glitzy as I had imagined it would be, and considering how young some of those folks writhing on the dance floor appeared, I felt more like the parental chaperon ("Hey, dude, where are you putting those hands on my student?!"). As you can imagine, I didn't get anywhere near the floor.

Anyways, I figured with the "Creator" category, Tetsuya Komuro was due for his article. As with the other creators that I've written about, I can't give much in the way of a deep analysis of his musicality, but to paraphrase an old friend who heard the first several bars of Akina Nakamori's（中森明菜）"Aibu"（愛撫）on her 1993 "Unbalance+Balance" album, "Ahh, that's Tetsuya Komuro...that's HIS sound, it's just gotta be him". And of course, he was right. And that was a year before I left for Japan on my long journey and splashed right into the Komuro Boom years where he brought in a mainstream dance sound for J-Pop.

The first time I heard of TM Network was through a performance the band did on one of the music shows on a video tape that one of my very first students had brought back for me from Japan. At the time, I didn't know who the three guys with the super hair manning the instruments were at the time, but I noticed that the keyboardist had hair as tall as that pile of whipped cream that's being put on pancakes that are all the rage in Japan now. I know that the performance wasn't of "Get Wild", one of TM Network's greatest hits but I would later find out that the keyboardist was indeed Komuro.

TM Network had been around since the early 80s so Komuro was already creating tunes for other singers (for the purposes of this article, I'm really going with his work as a composer more than as a lyricist), and one of his earliest creations was for the bashful teen above. The 1985 song was "Kimi ni Aete"（きみに会えて...Being Able To Meet You）with Norie Kanzawa（神沢礼江）as the lyricist.


Of course, that bashful teen was soon identified to the masses as big-eyed and boom-voiced Misato Watanabe（渡辺美里）who had her breakthrough hit of "My Revolution" thanks to TK and Masumi Kawamura（川村真澄）a year later.


"My Revolution" is one of my favourite Komuro creations, and this is where I made one observation of his style. As much as those five years in the 90s were all about the Komuro dance-pop sound, my impression was that when he was not doing his techno-pop-rock thing with TM Network, he was making these spunky inspirational and uptempo songs for female singers such as Watanabe. "Sweet Planet" for Yukiko Okada（岡田有希子）from her 1985 album "Juu-gatsu no Ningyo"（十月の人魚...October Doll）was another example. Listening to it, I got that same feeling that I did for "My Revolution"; it sounded like TK was distilling Judy Garland or Reese Witherspoon in ever-optimistic Student Council President mode into every song back then. Yoshiko Miura（三浦徳子）took care of the lyrics here.


Example No. 3: Yoko Oginome's（荻野目洋子）"Non-Stop Dancer" from her top-selling 1986 "Non-Stopper" album. I heard this in the background of one of her videos from way back and just found it so chirpy and cheerful. Couldn't believe this was a Komuro tune at the time. Masumi Kawamura, TK's collaborator on "My Revolution", also worked on the lyrics here.

Yep, I just had to include "Aibu" by Akina Nakamori, the song that my friend immediately pegged as a TK invention just on sound. The above video doesn't have the greatest version but even then I could finally understand what my friend was on about. You might say that it's the prelude to the Komuro Boom.

And landing right at the beginning of that boom, we were all off to the races with TRF's "Boy Meets Girl" from 1994. The song just took me on its wing and soared off. I'm not the techno/dance music expert here but I think Komuro really enjoyed his House. TM Network (or as it was then called TMN) had disbanded that year but it looks like the songwriter had plenty on his plate to keep him busy and happy for a few years. And I think that TMN sound slid over with some more glitz added to be adopted by some of his family.

The first Komuro Family-connected CD I bought shortly after arriving in Japan was "Chase The Chance" by Namie Amuro（安室奈美恵）. With its zippy melody and epic refrain, I thought it was the theme song for a detective or spy series. Instead, the show was about a mystery hero chef. Go figure. Still, it was the first song by Amuro that really caught my attention.

I remember one New Year's Eve that I stayed in Japan and was watching the telly after gobbling down my annual bowl of toshikoshi soba. There was one special rivaling NHK's Kohaku Utagassen which featured a good majority, if not the totality, of the Komuro Family. It was basically a Who's Who on the stage: TRF, Tomomi Kahala（華原朋美）, Namie Amuro, Yuki Uchida（内田有紀）, dos, globe, etc. And I just thought that Komuro was really on top of the Japanese entertainment world at that time. During much of the 1990s, there would be at least a few members of the family that would be showing up on a weekly music show or promoting a new release via commercial.

Of course, all good things must come to an end, and by the time the century drew to an end, it looked like a new era of R&B and a new breed of aidoru represented by Johnny's & Associates and Hello Project was coming to the fore. But between 1994 and 1999, Komuro had a fine run of it.
Posted by J-Canuck at 11:37 PM