Okay, although I usually (always) used dear Harumi Miyako (都はるみ) with her shrill voice that makes the hair at the back of my neck stand on end as the prime example of why I prefer male enka singers to female enka singers, I have to admit that if she doesn't hit the really high notes or sing songs from the genre she's classified in, she actually sounds... pretty good. Well, but you know, only if she does those two things. Otherwise her voice is still difficult for me to listen to. So I never thought I'd be writing an article on one of her best known enka songs, "Naniwa Koi Shigure", a duet sung with composer Chiaki Oka (岡千秋). Despite being a little reluctant to check the song out after commenter Ranawaka Aruna recommended it - I don't think I would've looked it up otherwise - I was indeed rather keen to hear it for myself and probably see why it was pretty successful.

After listening to it, I'm glad to say that I enjoyed it on a whole. And I actually did not mind Miyako's enka voice! I thought I would, but I didn't. I must be getting used to it. Instead, I was more disappointed in Oka's vocal delivery, which was way too husky and made him sound like he had to constantly clear his throat. But at least he makes up for it with the cheerful yet elegant score he had composed for "Naniwa Koi Shigure" that made me stay and listen to the whole song rather than clicking the "Back" button after the first few seconds of it.

Takashi Taka's (たかたかし) lyrics are quite odd at first, but it slowly became heartwarming. I managed to find the Mandarin translation to it in the video above, but since my command for the language has greatly deteriorated after a couple of years of disuse (not like it was any good to begin with), I had Mom, who's effectively bilingual, help me out with the more important bits I missed. Basically it's about our main man here striving to be Japan's number one in the world of theater, unfortunately without much success. He'd also spend his time drinking away and horsing around, much to his wife's ire, but being the patient and hopeful woman she is, our leading lady tolerates his behaviour and allows him to do as he pleases, confident that he'll get to the top... eventually. So despite all the obstacles they face, they still stick by each other for love and support and to overcome their difficulties together.

"Naniwa Koi Shigure" was released on 21st May 1983, and like I've mentioned above, it did well on the charts, peaking at 3rd place on the Oricon weeklies and stayed within the top 20 at 18th place by the end of the year. On the same year, Miyako received the Special Prize at the 25th Japan Record Awards and on her 19th appearance on the Kohaku, she had sung this song with Oka. "Naniwa Koi Shigure" continued to stay within the top 50 in 1984 at 39th place.


Here's Kiyoshi Hikawa（氷川きよし）taking Oka's place by Miyako's side (actually that video has been taken down...instead he is with Aya Shimazu in the video). I do prefer hearing like his pleasant, smooth voice, and it's much more fun to watch him and Miyako singing duets too since they've got really good chemistry. Yup, so far, she's the only female singer I've seen this usually composed gentleman hug... like a real, proper, bear hug... many times... 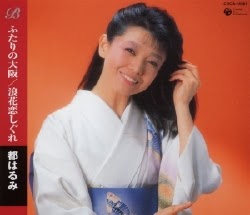