I don't think I've ever done this in the blog before. This isn't an official cover of one of my favourite Yellow Magic Orchestra songs and the excerpt lasts just a bit over a minute but when I saw this scene on "Sound! Euphonium" which is one of the current anime that I've been watching, I was caught completely off-guard (I think in today's vernacular, it would be called "squeeing", but frankly I don't think you young folk would want to imagine a middle-aged man squeeing, would you?).

Now, I'm pretty sure "Rydeen", in its 35 years of existence, has managed to find itself in the playlist of Japanese high school marching bands, but it is the first time for me to hear an example of it done this way. And just as the spectators along the street took notice of the Kitauji High School Band playing an old technopop classic, I certainly popped up in my seat. And it seems from the YouTube comments that the folks there did so as well. After checking the official music video for "Rydeen", I found a number of new comments stating that they came over because of "Sound! Euphonium".

"Sound! Euphonium" (known as Hibike! Euphonium「響け! ユーフォニアム」 in the original Japanese) is the story of a down-on-its-luck high school band that re-discovers its own mojo thanks to a pluckier group of students and a young music teacher who initially looks like an adorkable pushover but is anything but. I've been enjoying the first half of it but it was the above scene that sealed the deal for me.


This was a video that I saw on the side of the "Sound! Euphonium" excerpt. It's the performance of "Rydeen" by a high school band from Iwaki City, Fukushima Prefecture, and after listening to it, I wonder if this was also the group who took care of the performance on the anime. I also muse if it or some other orchestra has done other tributes to YMO. 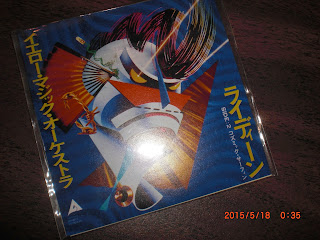 And finally, here's the long version.