As I was watching the latest episode of "Kayo Concert"（歌謡コンサート）back on Tuesday night, I was especially attracted to one song that was performed by Midori Oka（丘みどり）in keeping with the episode's theme of heading out into the boonies due to some heartbreak. It was titled "Kitaguni Yuki de" (Heading North) and I liked the brassy horns which hinted to me that this was probably a song from the late 60s or early 70s.

My targeting scanner did well. "Kitaguni Yuki de" was indeed made and released in January 1972 as the 11th single for Eiko Shuri（朱里エイコ）who was born in 1948 in Tokyo. The song was most likely Shuri's biggest hit although I couldn't find out high it got on the Oricon singles charts in terms of weekly sales, but I did find out that it ranked No. 26 on the yearly charts with close to 360,000 records sold.

Shuri, who had been born Eiko Tanabe（田辺栄子）, had an interesting back story in which she decided to strike it out on her own in the entertainment industry not in Japan but over in the United States all by herself at the age of 16 after releasing a couple of local singles. Unsuccessful her first time around, she returned to Japan in 1966 to have another go at releasing records and giving her own solo concerts before giving America another try in 1969. This time, she hit paydirt and with her band managed to score some good gigs in Las Vegas, New York, Los Angeles and so forth.

Coming back to Japan again for a brief time in 1971, she released one more single before the successful "Kitaguni Yuki de" came along. Written by Michio Yamagami（山上路夫）and composed by Kunihiko Suzuki（鈴木邦彦）, the song dealt with Shuri's sad but determined decision to leave the man (and the city) that she had loved complete with a Dear John letter. Just my speculation, but I think the singer may have put something personal into her delivery considering her bicoastal career which likely lent to the song becoming a hit. And it was such a hit that Shuri was even able to appear on the 1972 Kohaku Utagassen which I think is the video above. Looking at the video, I do think that there was something rather striking about her fashion sense and how she moved across the stage that seemed to say Las Vegas to me...something very glitzy. Considering all the trials and tribulations, it must have been some triumph for her to appear on the NHK special. She would appear again the next year to sing "Jet Saishu Bin"（ジェット最終便...Final Jet Flight）, her 15th single.

Shuri would release a total of 29 singles and 14 albums (including BEST compilations) up to 1992. Sadly, she would pass away in 2004 from heart failure at the age of 56.

Shuri's magnum opus would be passed down through other performers' takes on the song by songstresses such as Rumiko Koyanagi（小柳ルミ子）and Hiromi Iwasaki（岩崎宏美）.


One rather interesting piece of trivia I did pick up from the J-Wiki article on the late Eiko Shuri. Apparently at one of her Las Vegas shows for which she received a standing ovation, none other than the Beatles' Ringo Starr was in the audience. He was able to meet her and even asked her out for dinner to which she demurely declined. She later related that she had rejected Starr's invitation since she felt that she was still too naive to handle the situation, stating that if she had accepted it, she could have ended up become the second Yoko Ono! (shuri, you jest...sorry, I had to get that one out)


And since I'm feeling rather whimsical tonight, here is a silly Japanese commercial starring Starr himself. Have a good weekend! 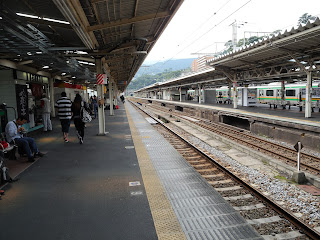