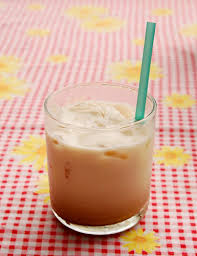 When I first heard Yasuyuki Okamura's（岡村靖幸）old single "Kahlua Milk", I was pretty astounded at how similar his lyrics sounded like my life back when the song was first released in December 1990. Not that a "Big Bang Theory"-friendly geek like me was carousing with girls at all back at that time. However, I was hanging out with my buddies from university almost every weekend at Kuri or at some disco in Toronto well into the wee hours just as Okamura was describing in his song.

Also, I was drinking down my fair share of Kahlua Milk during those days. Now in North America, the cocktail was known as a Brown Cow, and was frankly a ridiculously easy thing to make for the average mixologist: just pour some Kahlua Coffee Liqueur into a tumbler and top up with cream or milk. Like Okamura, both he and I gradually became able to drink somewhat harder fare (for him, a bourbon & soda; for me, just plain beer), but frankly the both of us preferred our sweet and milky Kahlua Milk. In fact, after a time, as soon as I walked into Kuri on a Friday or Saturday night in the late 1980s, the bartender knew to mix up my regular drink.

As for "Kahlua Milk", this was funky Okamura's 14th single. He took care of music and lyrics here and they seem to go into a form of redemption of sorts as he sings to his ex-girlfriend about trying to patch things up after a few years of debauchery with the buddies in downtown Tokyo. He's gotten all that stuff out of his system and wants to at least make another go at a more permanent relationship. There's something quite reminiscent of 80s pop balladry about it and to amp up the nostalgia factor, he's included words such as "famicom" (family computer), "disco" and "rental video" into his lyrics. Of course for me, there is the titular drink as well.

I don't go out nowhere near as often as I once did. When I do, I sometimes ask for a Brown Cow at the restaurant but I've often gotten blank stares from the waiters. Only the bartender at the Duke of York knew exactly what I wanted without blinking. Sometimes I wonder if ordering a Kahlua Milk is the equivalent of asking for a steak well-done from a prize-winning chef.
Posted by J-Canuck at 8:34 PM