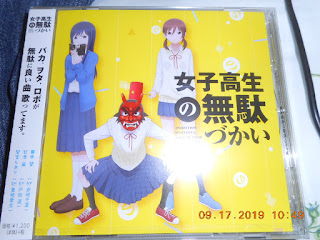 It's been a few weeks now since the zany "Joshikousei no Mudazukai"（女子高生の無駄づかい...Wasteful Days of High School Girls）finished up its episodes (hoping for a Season 2), and for the most part, Baka, Wota and Robo and the rest of their fellow schoolmates would provide proof why they should be initially monitored once they enter adult society.


Akane "Wota" Kikuchi（菊池"ヲタ" 茜）as played by Haruka Tomatsu（戸松遥）was usually the most normal of the three main characters, but even she had her moments.


The penultimate episode, "Yume"（夢...Dreams）, though, took on a more poignant tone which contrasted greatly with the nuttiness seen in the other shows. It all involved Wota falling for the words and music of the secretive TeishotokuP (perhaps even for the man himself), a producer of Vocaloid songs. The lass finally got the long-desired opportunity to meet her hero at some sort of autograph session...only to find out that TeishotokuP（低所得P）was none other than Masataka "Waseda" Sawatari（佐渡 "ワセダ" 正敬）, her stoic and long-suffering homeroom teacher with a self-admitted attraction for university students. Wota's shock was real.


Thing is, TeishotokuP is a real Vocaloid song producer with his own YouTube channel, and Waseda-sensei, according to TV Tropes, has a character which consists of a mix of "Joshikousei" author Bino's（ビーノ）buddy's personality and the "real" personality of TeishotokuP (not sure why there were quotations around real at TV Tropes). It's his actual song, "little bunny" which gets featured in "Yume", the original version and the one sung by Wota herself in her bedroom.

One small thing that I've appreciated in the past number of years watching anime is whenever a pretty good insert song comes out of nowhere to be played in an episode. "little bunny" as performed by Vocaloid GUMI is a surprisingly heartwarming pop/rock ballad for a tune created from synths and a computer vocal program, and the music video above has that poignancy in spades with that young melancholy lass walking the streets one winter night trying to figure things out. She could easily be replaced by Wota attempting to get back on balance after her discovery of TeishotokuP's true identity.

I'd assumed that this would be my first article on GUMI. However, I was wrong here since she's already gotten at least one article, thanks to her being the original singer for "Kokoro Palette" (ココロ＊パレット) which would later be used as an insert song for another anime that I enjoyed in the past, "Kono Bijutsu-bu ni wa Mondai ga aru!" (この美術部には問題がある!). That would be another show that I wouldn't mind seeing return.