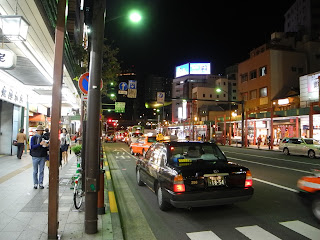 I didn't really use taxis all that much in Tokyo when I was living in the area since the subways and JR trains were plentiful and much cheaper, but when I did, it was always a comfortable experience with the drivers in uniforms and white gloves, plus those automatic rear doors...😃. The cab was definitely a godsend whenever I ended up missing the last train home, and it was quite the walk from the outskirts of Tokyo to my neck of the woods in Ichikawa City although by the Tozai Line, I could get from Minami-Gyotoku to downtown within 20 minutes.


Taxis have shown up in a number of titles for Japanese pop songs over the decades such as "TAXI" by Kiyomi Suzuki（鈴木聖美）with Rats & Star, and Miho Nakayama's（中山美穂）"Midnight Taxi", and they've all seemed to have that glow of urban contemporary in their DNA. Well, this number I found some time ago, "Togenkyo to Taxi" (Shangri-La & Taxi) by singer-songwriter Mega Shinnosuke has got some of that modern City Pop essence with some club kid sentiments thrown in. It's nice and groovy and spacey, and the music video has the fellow hanging out with his buddies in an all-night video game parlour in Shinjuku or Ikebukuro, perhaps. The gang also has electropop musician Aaamyyy helping out in the chorus. I think the video and the song make a good match.

Just grabbing bits and pieces from various sources including his Twitter account and Tower Records, Mega Shinnosuke was raised in Fukuoka on November 20th 2000 but now resides in Tokyo. The Tower article mentions that he often traverses the genres of City Pop, rock/funk and synthpop, so he's gotten my attention right there. Also, "Togenkyo to Taxi" has been included on his EP from this June, "Honne".
Posted by J-Canuck at 11:18 PM