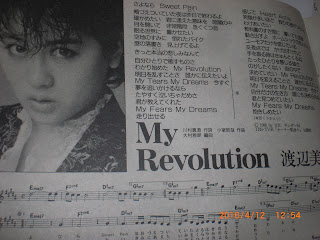 Well, it's amazing how a music video can change a viewer's perception on what a song really means.


Here I was looking at the concert version down below of Misato Watanabe's（渡辺美里）9th single "Kanashii ne" (Sad, Isn't It?) from December 1987. As I was listening to this song that I hadn't heard all that much and taking a look at the lyrics by Watanabe herself, I was assuming that this was another ballad about how parting is such sweet sorrow for a romantic couple.

Well, the above official music video for the pretty and melancholy "Kanashii ne" (if you just want to get to the song, go forward to around the 2:07 mark) paints the story in a different light. As things begin with a poor pencil getting kicked down to the ground and then rescued by college student Misato, I realized that the song could be used as a message about things that used to get a lot of love eventually being abandoned to the cruel elements, and by the last half, there's even a rather stark image of mass pollution. The images and song even had me remembering one of the plots in the "Toy Story" franchise.

"Kanashii ne" was composed by Tetsuya Komuro（小室哲哉）and it peaked at No. 2 on Oricon. Incidentally, the song was also part of Watanabe's 4th album "ribbon" released in May 1988 which hit No. 1 and ended up as the 3rd-ranked album for that year.

I've currently got a television right behind me that started its life when Ronald Reagan was still President of the United States. It died quietly one day a few weeks ago. It lived a good life but after watching the music video, I'm kinda wondering what to do with it now, outside of kicking it to that part of the parking lot for larger electronics garbage.