I hope everyone has been dealing with these times the best way possible. I sure am trying, amidst online classes and assignments, to dedicate myself to my hobbies, including the Animal Crossing craze.

While exercising, I have been listening to some music I wanted to pick up for a while, mostly modern aidoru. One of these is the album I am going to cover. 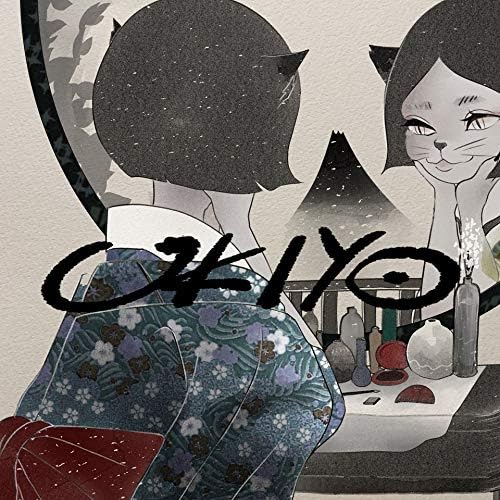 Wyenra (ゑんら) is one of my favorite idol groups of the last few years. It was formed in 2018 after Hikari Takiguchi and Misato Miira (formerly known as Misato Misaki) departed from their former group to seek creative independence. They scouted Hikari's younger sister and also an idol, Kirara, and set to produce their own act. The peculiar name is based on the smoke youkai Enra/Enenra, derived of the wish of becoming an unrestricted musical act. However, the theme of Japanese youkai and other folklore is recurrent in the group's songs and overall aesthetic.

Last year's UKIYO is the first full album of the group, promoted with the tagline "looking to become 'scary-cute'." Mixing some traditional idol music elements with waltzy and techno sounds, each song has its own charm and I will be covering a few of my favorites.

The first track of the album is Unbalance (アンバランス), which I consider Wyenra's trademark song. It is has a distinctive pop sound and it is very catchy, with repetitive but nice guitar instrumentals and phrases accompained by drums that keep the mind focused in the tune. The composition is courtesy of koma'n, a singer-songwriter who rose to fame doing Vocaloid covers and has been responsible for a few of Wyenra's songs. The group's leader Misato is also their creative producer, penning most of the lyrics, as well as providing the illustrations for the cover arts and merchandise. I think Unbalance is a very good entrance into Wyenra's sound, but definitely only a fraction of what they have to offer.


This is what I'm talking about. Mayoi Jibakurei (迷い地縛霊) is one of my absolute favorite Wyenra songs. The title translates to something like "lost landbound spirit" - the ghost that cannot understand why it died, so it stays tied to the place of death. Judging by the lyrics, this can be taken as a metaphor, which amplifies the sort of despair and hurry one can feel while listening to the song. This track really is one of its kind and helps defining the "scary" side of Wyenra's character.

Retro Hanako (レトロ花子) is a softer tune based on the popular urban legend of the toilet-haunting ghost "Hanako-san". With an almost acoustic-sounding arrangement, this song makes me feel nostalgic, with the lyrics also alluding to reminiscing about the memories of Hanako-chan, who lives in the subject's memory even after they became an adult, even talking about... Being Hanako-chan themselves. Who knows?

Remember the tagline for this album - Horror Kawaii (ホラーかわいい) is a very upbeat traditional idol song that mixes a bit of sadness and despair with cuteness and romantic love. The lyrics were penned by the whole group while the composition is also credited to koma'n. Misato and Hikari's former group drop was also known for high-tempo cutesy songs such as this one, so it's nice to see them exploring a similar formula with a more individual twist.


To wrap it up, this is probably my most listened song in the past month: Yakuneko (厄猫). This is a very fun piece composed by Jun Matsumoto, frequent member of support bands for artists such as Chara and Kana Adachi. The bass and piano sounds jump around while the members sing about a "mischievous cat, deceiving cat" who looks to no means to see their needs met, leaving the subject with no other option than to stop caring about them anymore. I got hooked into this one since I first listened to the instrumental version.

It is my first time covering an entire album and it was hard to squeeze it down to a few tracks, but I feel like this is already one of the albums of the year for me. It's a breath of fresh air since Wyenra keep on doing their own thing, not overlapping too much with any other modern idols and also offering a hint of nostalgic sounds and a good variety of music. While it's definitely still an idol group with its perks and quirks, I would recommend giving a listen to this album and, if possible, the previous mini-album KEMURI, which has some more songs worth looking into.

I hope everyone stays as safe as possible and do not forget to keep doing your favorite things. I will definitely keep listening to a lot of idol music. Some of Akina's albums are up for streaming and a few concerts were uploaded to YouTube, so I might get around to a re-re-re-relisten...
Posted by Joana Bernardo at 7:05 PM