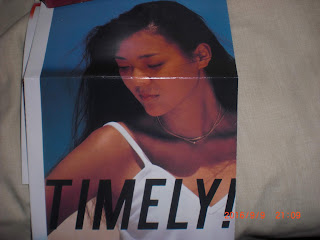 First off, I will have to apologize to Anri（杏里）for putting that crease across her nose. Secondly, because our spring here in Toronto has gotten off to frankly an unusually cold and lousy start, I feel that I will need her assistance in bringing some of that summery feeling to this blog at least.


So, why not go with "Lady Sunshine" from her 5th album "Bi-Ki-Ni", released in June 1983? This was written, composed and arranged by Toshiki Kadomatsu（角松敏生）with the strings and brass arrangements handled by Jun Sato（佐藤準）. The song also served as Anri's 12th single from the same release day. From just from how summery and boppy "Lady Sunshine" sounds, veteran City Pop fans would already know that this is a Kadomatsu creation (frenetic bass...check, tight horns...check). And of course, "Bi-Ki-Ni" was one of the famous Anri-Kadomatsu collaboration albums from the 1980s.

Kadomatsu's lyrics relate the story of how the summer has managed to tear one woman away from her beau. Why be stuck with one guy when she can embrace an entire season and a beachfront? I can only hope that our summer will eventually do that with us (mind you, we'll have to be careful under COVID-19). I don't know how "Lady Sunshine" did on the charts but as for "Bi-Ki-Ni", it did hit No. 27 on Oricon, and two of its track mates are songs that I've already covered: "Surf City" and "Goodbye Boogie Dance".
Posted by J-Canuck at 3:33 PM