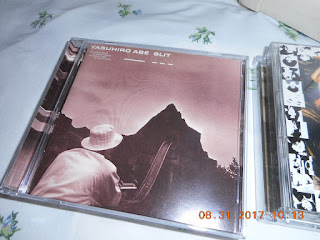 Not nearly as wintry as it was yesterday, so perhaps we will finally be heading into something resembling the proper season of spring. The rate of daily COVID-19 increases has bumped up again for the second day in a row but only slightly, and the premier of the province has once stated that there's good news around the corner, so I'm wondering if this means that shopping malls may be opening up once more. Any sign of team sports is several weeks again at the earliest, it seems.


Anyways, let's provide you with the second song on KKP today, "Kare no Shousoku" (His Whereabouts) by velvet-voiced Yasuhiro Abe（安部恭弘）. A track from his 1984 second album "Moderato", Takashi Matsumoto（松本隆）provided the lyrics to the singer's own composition, and as expected, "Kare no Shousoku" goes down plenty smooth. Some nice AOR horns, mellow background vocals and a wistful arrangement characterize this one.

His last album "Through the Past" was released back in January 2019, and though his concert scheduled for March 15th this year was not surprisingly postponed due to the pandemic, he's still planning to hold it on July 11th. I truly hope that he can make sure that the show will still go on.
Posted by J-Canuck at 2:18 PM