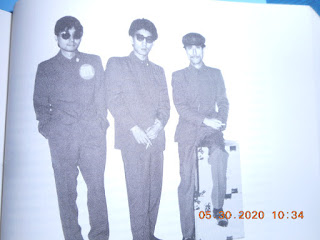 Commenter Michael pointed it out to me earlier this morning and I had also read an article about it on the Mixi news feed a day before, but a few weeks ago, singer/musician/songwriter Yukihiro Takahashi（高橋幸宏）, famous as one-third of the technopop group Yellow Magic Orchestra had to go into surgery to get a brain tumour removed. I did find an article at "Arama Japan", in which apparently he had the operation in which the tumour was successfully removed on August 13th, and according to the man himself, things are looking pretty good, although there is currently no timeline for his return to music. I would tell him to take things easy and smell the roses and coffee really deeply.


As such, I wanted to provide a tribute to Takahashi tonight and so I'm going with his second solo single and the title track from his second album "Ongaku Satsujin" (Murdered by the Music), both of which were released on June 21st 1980.

First off, I want to offer my apologies to anyone who may think, considering the contents from that initial paragraph, that it may be a little tasteless and a little too soon to go with a Takahashi song with that title, but for one thing, the prognosis for Takahashi is good, and for a second thing, "Ongaku Satsujin" is pretty darn good as well, and it was the song that caught my ear hard as I was searching for a new Takahashi number to cover.

I have yet to listen to the rest of the album but Wikipedia has an article devoted to "Ongaku Satsujin", and his YMO bandmates, Ryuichi Sakamoto（坂本龍一）, Haruomi Hosono（細野晴臣）and collaborator Hideki Matsutake（松武秀樹）were involved. Additionally, vocalist Sandii of Sandii & The Sunsetz and guitarist Makoto Ayukawa（鮎川誠）of Sheena & The Rokkets also gave their contributions to "Ongaku Satsujin". As I said, YMO was basically in the house on this album, but just from the title track, this isn't the usual technopop although synthesizers are indeed involved. Aside from the intro, the single "Ongaku Satsujin" is some jolly New Wave about a fellow who got a little too far into his radio-listening hobby and ended up dead in that "pool of sound".

Chris Mosdell provided the lyrics of overindulging the FM while Takahashi and the aforementioned Ayukawa came up with the music that had me thinking of "Pump It Up" by Elvis Costello & The Attractions and "Shake It Up" by The Cars. A lot of skinny guys in their skinny ties and skinny slacks there. I think it's also Mosdell playing the victim who sounds like Mr. Bill getting attacked by water. Also, some great solo guitar work there perhaps by Ayukawa.

The album "Ongaku Satsujin" peaked at either No. 12 or No. 14 on Oricon according to the J-Wiki article. Once more, I'm extending my good wishes to Takahashi on an excellent convalescence and if he ever encounters this article, this was never meant as an unfunny poke at his situation.
Posted by J-Canuck at 9:33 PM