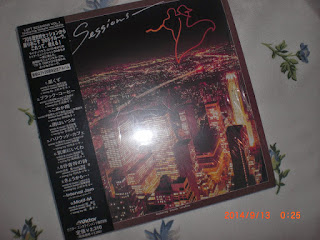 It's been almost six years since I purchased "Loft Sessions, Vol. 1", an unusual album released in March 1978 consisting of songs of varying genres including City Pop performed by female vocalists who had an association with the live house chain Loft in Tokyo. There's even a J-Wiki article devoted to Loft which was first founded by former (then known as) Ministry of Posts and Telecommunications employee Yu Hirano（平野悠）in 1971 as a jazz café. After that, folk/rock branches of Loft were set up in areas such as Shimo-Kitazawa, Nishi-Ogikubo and Shinjuku.

I purchased the album which was featured in my City Pop bible of "Japanese City Pop" for a couple of reasons. One was that a pre-debut Mariya Takeuchi（竹内まりや）had a couple of tracks in there which have already been written about in the blog, and the other is that I rather fell hard for that wonderful album cover with not only a great bird's-eye view of a city but also of the logo of a couple tripping the light fantastic. Unfortunately, it's taken quite a while for some of the other tracks on "Loft Sessions, Vol. 1" to see the light of day...or YouTube, but finally a number of those songs have appeared so I can write about them.


The first track is Kaoru Uemura's（上村かをる）cover of "Hoshikuzu"（星くず...Stardust）, originally created by Youma Fujita（藤田洋麻）and performed by band Makoto Kubota to Yuyake Gakudan（久保田麻琴と夕焼け楽団）back in 1977. The original has that mellow Margueritaville folksy vibe but Uemura takes things downtown disco with her version. I can see the Shinjuku or Roppongi glitter ball now.


Back a few days ago, I made my first article on Shizuru Ohtaka（おおたか静流）and her ethereal cover of the kayo classic "Kanashikute Yarikirenai"（悲しくてやりきれない）in 1992, and at the end, I remarked that Ohtaka had actually been singing since the late 1970s at least under the name Shizuko Ohtaka（大高静子）. Well, this is the song that she composed and recorded as the 2nd track on "Loft Sessions", "Black Coffee"（ブラック・コーヒー）.

With lyrics by Yasuki/Yasuteru Konishi（小西保輝）and music by Ohtaka herself about a cup of joe no longer being quite so bitter to perhaps indicate a woman getting over a broken heart, "Black Coffee" explodes out of the gate sounding quite progressive rock/pop and reminding me of a Joni Mitchell song. Ohtaka back then seemed to have a voice similar to that of City Pop/R&B chanteuse Minako Yoshida（吉田美奈子）, ranging from wafting and delicate to slightly growly. Masami Tsuchiya（土屋昌巳）of Ippu-Do and Minoya Central Station fame arranged this song which also wavers from that dramatic rock passage to some of that softer melodic contemplation in the café.


The above video uploaded by LX Archives is actually one of the not-so-full album (due to the usual copyright issues...ahem). However at 9:03 is the one song that I really wanted to feature from "Loft Sessions" and that is "Ame wa Itsuka"（雨はいつか...When is the Rain?）by singer/songwriter and guitarist Yoshiko Yoshida（吉田佳子）. A cover of a Sentimental City Romance song from the band's December 1977 3rd album "City Magic", this splendid song by SCR member Nobutaka Tsugei（告井延隆）is handsomely crafted into this version performed by Yoshida. I couldn't have asked for a more comforting folk-country kayo about a long walk or a long walk through life.

The performance here also includes a couple of guests, Koichi Matsuda（松田幸一）on harmonica and Ritsu Murakami（村上律）on steel pedal guitar,  from a band that I had just written about yesterday, The Last Show（ザ・ラストショウ）. I would have included "Ame wa Itsuka" in its own article in comparison with the original by Sentimental City Romance since the video for it is up on YouTube, but I couldn't wait. However, I will tackle that one soon enough.


The last song that I'll put up here has the singer who started things off. Kaoru Uemura wrote and composed "Kyo kara"（きょうから・・・From Today）. It's a bluesy jazz ballad close to a torch song about a woman recovering from a hangover after a most interesting night with a fellow. She seems to be making amends for her follies but then near the end, the song takes a 90-degree turn and goes super funky for some reason. Perhaps the lass didn't learn her lesson after all.

Not sure whether founder Hirano ever decided to have a concert version of "Loft Sessions, Vol. 1" but that would have been quite the gig for everyone including the fans. There was never a Vol. 2 unfortunately, but recently a new version of the 1978 album was released called "Loft Sessions, Vol. 1 Outtakes" which includes most of the original tracks (but not the Takeuchi and Ohtaka entries) on one CD with another CD featuring outtakes of those originals.
Posted by J-Canuck at 10:12 PM