When I listen to Frank Nagai's "Sakaba no Hana", the image I get in my head would be that of a salary man, tie loosened, hair somewhat scruffy after a tough day at work, and he would be outside on the chilly (yes, it shall be winter time), dimly lit streets of a drinking hole late at night - about midnight or so, or at least when some joints are closed - with a cigarette wedged into the corner of his mouth, wandering around with only his thoughts running through his mind. An occasional pause to stare at the dark sky void of any stars, puffing out a cloud of tobacco smog and his own breath, and he continues on. 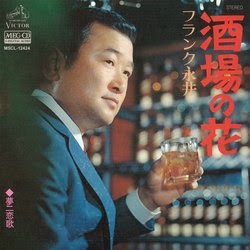 amazon.co.jp
Long story short, the soft music, that seems to have both the qualities of an Enka and Mood Kayo song, composed by Koichi Morita (森田公一) just paints a lonely yet strangely comfortable picture. Nagai's crooning with his smooth as brandy voice with an edge just adds to the atmosphere. Ah, "Sakaba no hana" and Yujiro Ishihara's (石原裕次郎) "Yogiri yo Konya mo Arigatou" (夜霧よ今夜も有難う) just make the perfect pair of night time tunes.

Now, for the Hiroshi Uchiyamada & Cool Five (内山田洋とクール・ファイブ) version. The image I get is similar to the one above, however, the man is sitting at the bar with drink in hand rather than roaming the streets. Warmer and not as alone - you got the bartender staring at him and keeping the lad company, so that's something, I suppose.

I found that the Mood Kayo group's rendition of "Sakaba no Hana" leaned more to the genre of Enka in its music, and its fuller, more up-to-date arrangement kinda lost some of the original's loneliness hence the description above. Another thing that contributed to that is the difference in the two fellas' vocal delivery. Kiyoshi Maekawa's (前川清) voice, while deep like Nagai's, is too intense for this delicate song and it felt like he was holding back. Whereas Nagai handled it better as he sounded a lot more relaxed.

I like both versions just as much as they are slightly different in their own respect, but if we were talking about atmosphere, I would go with Nagai's one... Yeah, first time ever that I picked a version without Mae-Kiyo in it!

Apparently Ikuzo Yoshi (吉幾三) tried his hand at this song. I've never heard it, so I can only imagine how it sounds like.
Posted by Noelle Tham at 10:01 AM