I must've been ignoring the top most paragraph on his J-Wiki page because I just came across this just yesterday: Hideo Murata (村田英雄) had a nickname just like the rest of the San'nin no kai (三人の会), Michiya Mihashi (三橋美智也) and Hachiro Kasuga (春日八郎). Mihashi's moniker was Michi, Kasuga's was Hachi, and last but not least Murata's was Muchi... I was not expecting that. I had assumed that if Murata had a nickname, it'd be something more imposing and macho, something more befitting of the manly vibe he emanated. But I suppose Muchi is fine too to fit in with the other two fellas since theirs ended with a "Chi" too.

Moving back to the proper topic, today I shall be writing about... Muchi's (it's actually quite fun to say) "Mina no Shu", and I'm guessing it means something on the line of "Everyone's crowd/gathering". Composed by the late Shousuke Ichikawa (市川昭介), "Mina no Shu" sounds really festive and cheery, and it has the audience clapping away and me swaying along to the easy beat. No wonder Murata sung this twice out of his 27 appearances on the Kohaku, first sung at the competition when it was released in 1964, then once more 10 years later in 1974. It seems like a pretty good summer song to play at someone's summer party or get together, then you have everyone joining in on it and having a blast. The lyrics were written by lyricist, screenplay writer and photographer Shinichi Sekizawa (関沢新一).

Link above is to a video of Muchi and his rival Haruo Minami (三波春夫) singing "Mina no Shu" together... A performance that I can sum up with one word: Amazing. To see two veterans in their field collaborate is just incredible! Okay fine, Minami did slip up on his lines at last part, but hey, it was still a great show.

"Mina no Shu" is also quite the catchy ditty, and it normally gets stuck on replay in my head once I start listening to it - like now, for instance. It can get quite irksome, but I enjoy anyways. 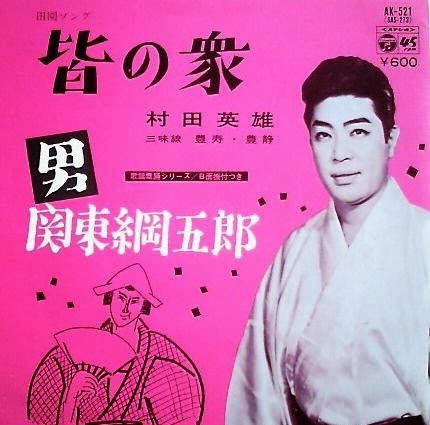 Right, I think I should at least mention that Lee Kuan Yew, the first Prime Minister and the founding father of modern Singapore, has just passed on today. He had a great run, contributed a great deal to the country's growth and development, and lived a long life. Rest in peace, sir, you had done a mighty fine job.
Posted by Noelle Tham at 10:45 AM