While easing my way into the world of old Enka, one title that I'd always see was Hachiro Kasuga's (春日八郎) big hit and representative song "Wakare no Ippon Sugi". I never did check it out back then though, with Hachi's name being foreign to me and all. Then in the later days as I got used to his warbling and discovered some of his other hits, I decided to finally give it a listen.

Compared to the forlorn "Akai Lamp no Shuressha" (赤いランプの終列車) and the whimsical "Otomi-San" (お富さん) that I came to know and love, "Wakare no Ippon Sugi" revealed itself to be dull, quiet, and not as rousing. In fact, I barely made it half way through the song before I got bored, and I think it's mostly because of its musical score. Well-known composer Toru Funamura (船村徹) was the one behind the haunting music, starting off with just the lonely cords of the acoustic guitar before the accordion, strings, and eventually Kasuga's nasally voice come in to add another layer of melancholy.


So there I was, scratching my head in disbelief that such a song could be so successful and sold around 500 000 copies. And then one fine day, a part of it popped into my head. It took me a while to finally realise that it was "Wakare no Ippon Sugi" running through my mind. Strange how that happened since I only listened to it on that one occasion, and as I had said, I didn't particularly like it. But just like tunes like these, they grow on you the more you visit it (which I had done), and that's just what "Wakare no Ippon sugi" did. I think one question mentioned in J-Canuck's recent article on Spitz's "Robinson" really comes into play here. It goes like this, "Is there a song that you didn't like initially but you have come to love later in life?" I wouldn't say that I love "Wakare no Ippon Sugi", and the later in life was just a short period of a few months, but I definitely appreciate the song and like it hecka more than I used to.

Before I forget, Kimio Takano (高野公男) had written the lyrics to "Wakare no Ippon Sugi", which primarily talks about the fellow feeling homesick, I think it shows the angst his lady feels as she painfully waits for his return as well. It was Takano's best known and one of his last pieces of work as he contracted Tuberculosis during the song's release in 1955, and had unfortunately passed away on the following year at the tender age of 26. 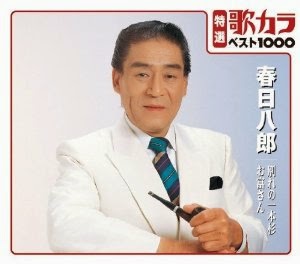