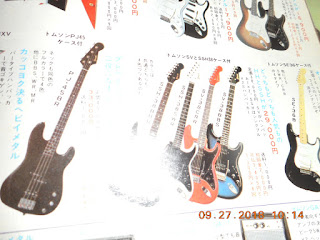 Next to the various dance music sub-genres, the next big hole in my musical knowledge regards the rock sub-genres. Recently, I've been able to get a grasp on what shoegaze/dream pop is all about but now there is this whole thing about Emo that I don't know. From what I've read on Wikipedia, I gather that it's all about how the singer expresses those emotions, and if he/she expresses them really loudly, the new genre is Screamo. So I guess that maybe Emo is the opposite of shoegaze?

Anyways, the Japanese expression for Emo is also given as Emotional Hardcore, and that has been the label used to describe the rock band Stereo Fabrication of Youth. Formed in Nagoya in 1999, according to J-Wiki, the genesis took place at some sort of folk song association event at Nagoya University. with the band making its major debut in 2003. As of that year, the lineup consisted of vocalist/guitarist Ryo Eguchi（江口亮）, bassist Takahito Uchida（内田崇仁）, guitarist/vocalist Tsutomu Wada（和田勉）who also created the songs, and drummer Yoshihiro Kato（加藤由浩）.

SteFab has released a compact variety of singles, albums and mini-albums. Their first mini-album, "KNOW FUTURE FOR YOU", came out in August 2002, so just before that major debut in April 2003 with the single "1979". Consisting of four songs, Track 2 is "two creatures", and yep, when I saw that music video above for the first time, I thought that the guy who had come up with the concept was the same fellow who came up with the poster for "Ant-Man" (although the camera does eventually move on up).

I also gather that Emo is the right label for "two creatures" since there is some measure of anguish and frustration in Wada's lyrics. They come across as a fellow fairly writhing about what the heck this love thing is and the target of his affections (or is he the target?) isn't exactly helping out. Indeed, the music is on a level of a sonic assault at times. although at 2:30, there is a brief interlude of bossa nova! But it isn't just the bossa nova but the whole song that actually sounds pretty good to me, and as you know, I'm not all that huge on rock.

Over the next few years after that, the members started leaving the band and right now, it's just Eguchi representing SteFab as of 2007. Eguchi is now under an indies label and he has been providing songs for other singers and bands such as Ikimonogakari（いきものがかり）, Maaya Sakamoto（坂本真綾）and LiSA. In fact, for LiSA, he arranged her big hit "Gurenge"（紅蓮華）.