My Favourite Works by Ryuichi Sakamoto（坂本龍一） 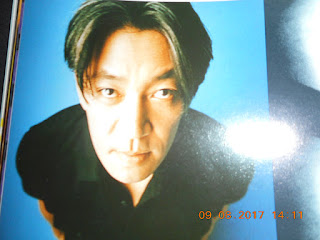 Man, this has been the most difficult Creator article and this has been the most difficult Author's Picks article that I've ever written...in a good way, of course. Ryuichi Sakamoto has been a music producer, musician, composer and arranger for so long and for so many other artists that his breadth of work is simply too huge to cover adequately, and I'm not going to pretend that I can even try to do that (in fact, a list of his works needed a separate page on J-Wiki). Therefore, I will take the Reese's Peanut Butter Cup approach and merge the Creator and Author's Picks here for this one article.
On top of that, that list is so big that I have decided to narrow things down by just including my very favourite songs (and yup, most of them are on the technopop side) by the Tokyo-born music man, and those are creations that he has provided other singers. Therefore, none of his Yellow Magic Orchestra or his solo material are included. Even so, I had to cram the Labels section to the 20-item limit so I couldn't even include all of the genres that he has dabbled in, but perhaps I can do so here: along with the Pop that I could squeeze in on the side, there are techno, New Wave, Latin, and City Pop among others. He's also been known to have helped in the formation of genres such as hip-hop and electro but otherwise, you can get the full biography at Wikipedia.
Finally, the entries that I've given here are ones that already have representation on "Kayo Kyoku Plus", so the usual links will be present. However, some time in the next little while, I hope to get a second part of my tribute to The Professor up on the blog which will cover those songs of his that I have yet to get acquainted with. 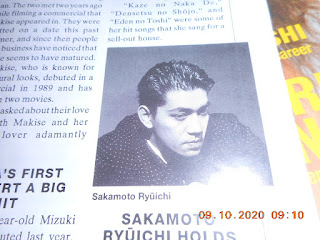 Yukihiro Takahashi -- Elastic Dummy (1978)
This is a Sakamoto instrumental but it was included on his YMO bandmate Takahashi's（高橋幸宏）solo "Saravah!" album. With "Elastic Dummy", I think about my favourite salad that I bought from convenience stores such as Lawson and 7/11 with all sorts of bright and leafy vegetables with the much-vaunted protein of chicken chunks and a spicy-sweet dressing. In other words, "Elastic Dummy" has got everything of nutritious urban contemporary value: disco, detective drama soundtrack, City Pop, jazz, samba, technopop noodling, Tatsuro Yamashita（山下達郎）, Minako Yoshida（吉田美奈子）and perhaps even a look into early 2000s J-R&B. Y'know, I wouldn't mind hearing this ball of fun (how much coffee did The Professor have when he created this one?!) being played over some ending credit sequence for a movie.
Rajie -- Watashi wa Suteki （わたしはすてき）(1979)
A track from Rajie's 1979 "Quatre" album, Sakamoto created this funky late 1970s Bee Gees-esque tune along with Akiko Yano（矢野顕子）. It's got the technopop in there, too, but it's not merely a YMO song with Rajie as the featured guest vocalist. The singer is leading the way here with her high and floaty voice about the "Nantonaku Crystal" lifestyle in the big city.
Taeko Ohnuki -- Decade Night (1980)
Choosing one from the Ohnuki/Sakamoto file was quite the task considering that the two had worked together on oodles of material for several years from the late 70s well into the 1980s. Ultimately, though, I had to go with "Decade Night" from "Romantique", Ohnuki's（大貫妙子）1980 album and the LP that introduced a new direction for the singer-songwriter. Sakamoto produced "Romantique" and a majority of its tracks including the enigmatically attractive and quirky "Decade Night" that simultaneously reminds me of New Wave, avant-garde and a 1960s Hollywood romance soundtrack.
NHK Jido Gassho Dan -- Computer Obaachan （コンピューターおばあちゃん）(1981)
Sakamoto was applying that technopop touch through a number of genres at that particular time, so he probably figured why not do the same to the kiddies' song. And so he arranged Ryoichi Ito's（伊藤良一） "Computer Obaachan" about one cool senior citizen as a popular song on NHK's "Minna no Uta"（みんなのうた） series.
Hiromi Go -- Hiromi-kyo no Hanzai（比呂魅卿の犯罪）(1983)
The Professor produced Hiromi Go's（郷ひろみ）album "Hiromi-kyo no Hanzai" and he composed the unique breezy and futuristic-feeling title track with Miyuki Nakajima's（中島みゆき）lyrics. Go's resigned voiceovers and Sakamoto's fleet-footed synthpop might bring images of "Blade Runner" but I can't help but think that the actual setting for the song is much more of a crystalline utopia.
Mari Iijima -- Blueberry Jam (1983)
If Sakamoto can provide a catchy technopop tune for a former aidoru of the 1970s, then he can do the same thing for a singer who played a fictional aidoru of the future from a beloved anime franchise. Indeed, I'm talking about Mari Iijima（飯島真理）and her creation of "Blueberry Jam" from the 1983 "Rosé" album. The song is supremely bouncy like an aidoru tune but it's got that Sakamoto sheen and I can even imagine Lynn Minmay singing that one on the SDF-1.
Miki Imai -- Martinique no Kaze （Martinique の海風） (1994)
https://music.apple.com/jp/album/a-place-in-the-sun/554916383?l=en
As much as I wanted to put up a cover of this song by Miki Imai（今井美樹）, I think only the original version as partially provided at iTunes displays the Sakamoto-ness of this mix of synthpop and bossa nova. I mean, up to the time that I got her 1994 album "A Place in the Sun", I had never thought a melding of these two genres was possible but I was happily proven wrong. "Martinique no Kaze" is easily my favourite track on the album because of this fusion, Imai's vocals and Sakamoto's piano solo.
Miki Nakatani -- Kinokhronika (1997)
My final entry for earworm Sakamoto goodness is Miki Nakatani's（中谷美紀）"Kinokhronika" from her "cure" album. At this point, it was verging on the 20th anniversary of the formation of YMO, but Sakamoto could still come up with the techno dance beats. Just imagine him holding court in the clubs. If I need an energy boost, I sometimes listen to this one.
As mentioned all the way up at the top, these examples are just a fraction of what Sakamoto has done, and it certainly looks like I've only scratched the surface of what I know of his works. However, these eight songs by the Professor are among my favourites, but I've caught a glimpse of some of these other Sakamoto works that have been unknown to me and I'll feature them in a second tribute in the near future.
Posted by J-Canuck at 4:42 PM