I had wanted to do this immediately after Hideo Murata's (村田英雄) 'Hana to ryu' to round off the 'Sannin no kai' posts with the aforementioned Enka singer's rival, but then the show with Akina Nakamori (中森明菜) came on and I couldn't possibly miss the opportunity of writing a post on an aidoru while I still felt like it... ... Well, but with that done, here's Haruo Minami's (三波春夫) debut hit 'Chanchiki Okesa'.

Officially starting his singing career rather late at the age of 34, Minami struck it big with this song as it sold around an impressive 2.2 million copies. He would then sing it twice on the Kohaku, though only 23 years after the song was released (1957). And he even starred in a movie with the same name in 1958!

'Chanchiki okesa' definitely sounds more jovial and listenable than the somewhat severe Enka-Rokyoku 'Otone Mujou' that came out 2 years later. Though I did end up liking 'Otone mujou' first since it was the first song that introduced me to the pretty much forgotten world of the narrative singing style that is Rokyoku.

But anyway, 'Chanchiki Okesa' actually sounds like something you'd hear at a traditional Japanese festival of some sort and I can just see Minami in a bright kimono dancing around with two paper fans in his hands. This was all composed by Yoshiji Nagatsu (長津義司). As for the lyrics that Showa period lyricist Hachiro Kadoi (門井八郎) wrote, it basically is about the fellow missing his other half as well as his family whom he had left behind in his hometown when he (probably) came over to the big city to find a job. Quite the odd bokyo song, I must say. Hardly ever hear one this upbeat.

Apparently there's a plaque that commemorates this song in Minami's hometown of Nagaoka, Niigata where the bronze statue of him is. Aw man, I have gotta check it out sometime! Y'know after visiting the Hachiro Kasuga (春日八郎) statue and Hideo Murata museum... ... 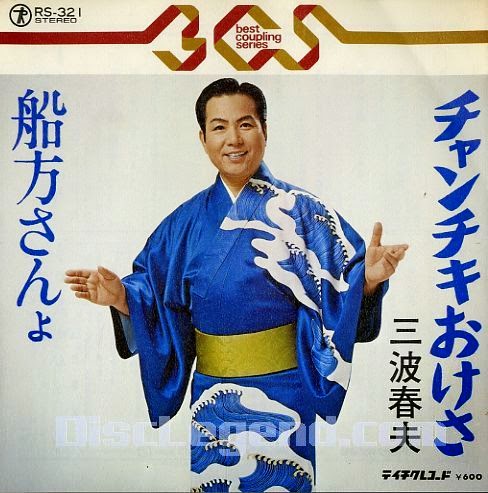