There are 3 bases for Mood Kayo: Jazz, of which I'm guessing is the one with the lonely sax or trumpet. Hawaiian, with its exotic feel that makes you envision the band members in gaudy tropical shirts and orchid garlands. And lastly Latin, listening to its music just makes you want to get up and sway to the beat. Out of the 3 I'm most familiar with Jazz and Hawaiian, but I can't say the same for Latin.

In fact, the only Latin Mood Kayo song I knew was Los Indios' hit from the early 80's, 'Wakarete mo suki na hito', although I did think the Latin group names were pretty rad, like the refrain as well as Akira Kurosawa & Los Primos (黒沢明とロス・プリモス)... well, the Los Primos part. And just so you know the Akira Kurosawa here's not the same guy as the famous movie director.

Anyway, I finally managed to catch the Latin MK group in action on Tuesday's 'Kayo Concert: Mood Kayo Fest' (I'm still ecstatic from watching a bunch of MK veterans on TV, bear with me on this one), and out of the 2 songs they sang the one that piqued my interest was 'Tasogare no Ginza' with its signature, "Ginza, Ginza, Ginza", which was really quite fun to listen to when combined with the cha-cha beat. So I guess from that moment on I could finally check off Los Primos from my list of Mood Kayo groups I've yet to listen to... boy, I've been waiting for that for quite a while actually!

'Tasogare no Ginza' (Ginza's Evening) was Los Primos' 8th single, released in 1968 and was either the 2nd or 3rd installment to the group's 'Ginza series', with the other 2 being 'Koi no Ginza' and 'Ame no Ginza' (恋の銀座 . 雨の銀座). All had its music composed by this guy Hiroyuki Nakagawa (中川博之), but 'Tasogare' was penned by Hanae Furuki (古木花江).

Being a big hit in 1968 and one of their 4 songs to be in the year's Oricon HOT 100, 'Tasogare no Ginza' got Los Primos their first and sadly only ticket to the Kohaku. Hmm, funny how they got invited for this song and not the seemingly more popular 'Love you Tokyo' (ラブユー東京) from 1966.


This would be a pretty good song to listen at a low volume while sitting at the counter of a quiet bar (in Ginza, perhaps?) sipping on something like brandy on the rocks, or through the earpiece as you take a stroll down the pavement of the posh district of Tokyo as the sunsets and as the store signs light up. Now that's nice... ... And then again, there's that perpetual crowd that pretty much ruins the mood. 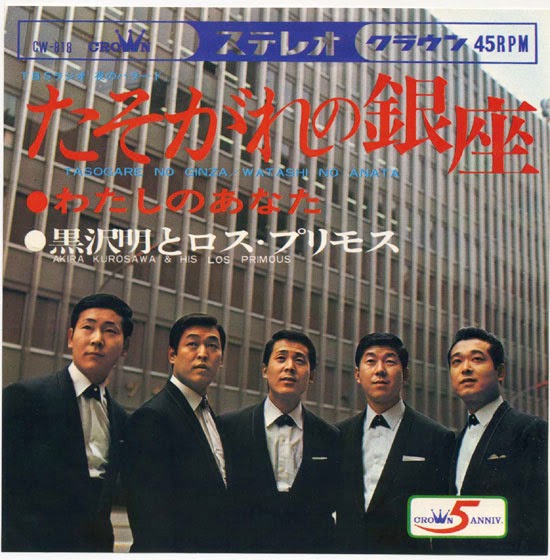