A couple of months back I had done articles on songs by each of the 3 reputable Enka singers from the 50's, collectively known as the 'San'nin no kai' (三人の会)... predecessors of the Gosanke, if you will. Actually, I prefer these ancient oldies to the real Gosanke with the reason being that they all look really grand and impressive during their senior years (didn't last long though). Well, there is also the part that they're more Enka than Kayokyoku which I kinda like.

So, a quick recap of the fellows: The fearsome-looking Hideo Murata (村田英雄), the stoic Michiya Mihashi (三橋美智也), and finally the amiable Hachiro Kasuga (春日八郎) who also happens to be my favourite out of the trio with his strange nasally voice. I had began the last '50's Gosanke posts' with Murata's 'Osho' (王将), so now I shall start off part II of this little series with Kasuga's biggest hit and one of my most played Enka songs, 'Otomi-San' (Miss Otomi). Full version is in the link below.

Released in 1954 with its jaunty, upbeat tune by the late composer Masanobu Tokuchi (渡久地政信), you'd think 'Otomi san' would probably be a song where everything is peachy and the protagonist is skipping through the streets without a single care in the world. Well, in reality, it's not as pretty as it seems. Apparently 'Otomi-San' is based on the Kabuki play by the name of  'Yowa nasake uki nano kogushi' (与話情浮名横櫛) wherein this fellow tries to get a rich merchant's concubine to fork over the cash... but unbeknownst to him the concubine was his ex. Ouch. Lyrics are by Tadashi Yamazaki (山崎正), and some of them are even from the play's script or something like that. The line below shows 2 examples of it... minus the 'ni' part, and it's also the song's first line.

I got this translation from this website or blog with some articles on Japanese music (culture) over the years... pretty informative too. You can check it out here.

Anyway, exactly how many copies of 'Otomi-San' is not known but it's not a long shot to say that it crossed the million mark. There is even a disco version of it from 1977 by EBONEE WEBB that is aptly named 'Disco Otomi-San'. That sold over 200 000 copies in just 2 weeks! Kasuga sang his hit twice on the Kohaku, during his first appearance in 1954 as well as his 21st and last appearance in 1989.


Just some extra trivia here... 'Otomi-San' was actually meant to be sung by the then famed Kayokyoku singer Haruo Oka (岡晴夫), but due to his shift from King Record to Colombia Record, the producers were desperate to find a suitable replacement. Then came the fresh-faced Kasuga (30 at that time) who was probably enjoying his time in the limelight after his debut hit 'Akai lamp no shuresha' (赤いランプの終列車) and the rest was history.

There have been many later renditions of the song by other Enka singers, and my favourite cover has got to be by the demure Sayuri Ishikawa (石川さゆり) who tackles 'Otomi-San' with great ease... haha, that sentence sounds funny! The more I read it the funnier it gets. But seriously, her smooth vocal delivery plus the music that's a tad slower in pace and slightly jazzy kick to it just makes for a good relaxing tune. Ishikawa's version was released in 2007 along with countless other covers of songs from the 50's and 60's in the album called '20 Seiki no meikyoku tachi' (二十世紀の名曲たち). It's got 10 parts with more than a hundred songs! 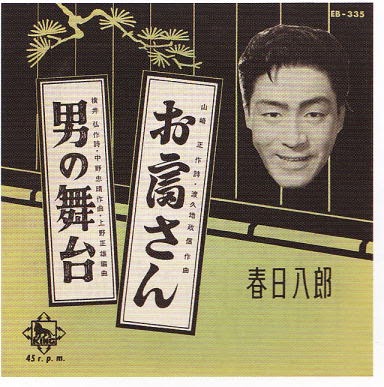 http://members3.jcom.home.ne.jp/sangorow/hotomisannewpage1.html
Posted by Noelle Tham at 8:28 AM