The persimmon is a fruit that I got to like somewhat later in life. It's known as kaki（柿）in Japanese, and it's not exactly too common in my area of Canada at least although it is well known in my ancestral homeland. My first experience with the persimmon wasn't too good; it tasted way too bitter, and sure enough there is the expression, shibugaki (bitter persimmon), and since I'm mentioning it here in this blog, there is the Johnny's aidoru group from the 80s, Shibugakitai（シブがき隊）.

However, once it finally ripens (or gets dunked into some alcohol for a few days), the persimmon becomes this luscious, sweet and messy thing that's quite delish. I've left a YouTube video up above just to show you what this fruit looks like, just in case some of you folks elsewhere on the planet are like I was when I was a kid and had no idea what the heck a persimmon was. To give credit where credit is due, the video was made by Perry Rush.


Anyways, on to the main song at hand here. A couple of nights ago, NHK's "Kayo Concert" paid tribute to the songs of longtime composer Toru Funamura（船村徹）who was the guest of honour on the show. Basically, Saburo Kitajima（北島三郎）, one of the performers of the evening, put it best about Funamura, "If there were no him, there would be no us."

I've already profiled a few songs that were composed by Funamura, and then came across this one on the show which fired up some of those old hoary memory engrams. It was "Kaki no Kizaka no Ie" (The House on the Persimmon Tree Slope) which was originally composed in September 1957 and written by the late Miyuki Ishimoto（石本美由起）. It's a venerable old ballad that has popped up over the decades on many shows, performed by many singers. In fact, it's a bit of a surprise considering how much of an enka standard it has become that it didn't earn its own article on J-Wiki.

The original version was sung by enka veteran Koichi Aoki（青木光一）who had been born in Saga Prefecture in 1926 before moving to Fengtian, Mongolia for several years and was detained in Siberia for a few years after serving in the Japanese army before being released in 1949. A year later, he would enter Columbia Records and release his debut single, "Wakai Arashi"（若い嵐...Young Storm）.

Aoki's "Kaki no Kizaka no Ie" had that reediness in the arrangement which I often related with the wartime and postwar kayo. And Aoki had that nasal and dreamy quality in his delivery which reminded me of some of those American Big Band crooners from a few decades earlier. Kishimoto's lyrics waxed wistfully on the protagonist's old hometown with that slope where his home was being just a few clicks from the little train station, how the scenes changed with the seasons and how the fellow wanted to meet that girl who may or may not have been an old flame. Probably the overall effect was to get all those folks working hard in the big city back in those days thinking about the relatively more idyllic days back in the countryside. Well, the effect worked as the song became an unprecedented hit for Aoki according to J-Wiki although I couldn't get any concrete stats on how many records were sold.

As I mentioned, "Kaki no Kizaka no Ie" has been covered by many enka singers over the years. The above link is for one version sung by Takashi Hosokawa（細川たかし）, although I couldn't track down when exactly his version came to the light of day. The arrangement is lusher (which is how I've always remembered the song) with the addition of those enka strings, although it still retains that feeling of the countryside.

Like Funamura, the 89-year-old Aoki, who is even older than the composer by 6 years, is still active in his career. He is even a Chairman Emeritus of the Japanese Singers' Association. 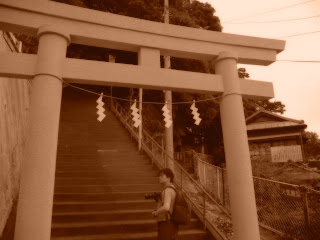