Not when you're in Singapore at this time. It has been terribly hot over here with temperatures claiming to be 32-33 degrees Celsius but it really feels like 37-38, and there's hardly any rain to give some respite from the scorching heat. Well, it did rain on Sunday (in the east, at least). For an astounding 5 minutes the sky was grey and it got slightly cooler, then for an amazing 5 minutes it rai-.... no, it just drizzled before the sun was out again. And half an hour later when it was time for me and Pops to go out to the fish farm, there was not a single puddle in sight. On the other hand, according to the weather reports, there has been showers over Tokyo over the past month. How nice.

Speaking of rain in Tokyo, I'll be talking about "One Rainy Night in Tokyo" today. I managed to root out this very comfortable song a few months back when it wasn't so hot and when I was in the mood for something jazzy with the fruity voice of Yujiro Ishihara (石原裕次郎) - he's one of my go-to fellas if I want something relaxing. So while browsing through a YouTube channel with many videos of Tough Guy's songs, I came across "One Rainy Night in Tokyo" (the video above was the one I found) and went ahead with it since its title, combined with the thumbnail's picture, really screamed jazz.

I must say that Ishihara's quiet, laid-back delivery really compliments the soulful saxophone and the light tinkling of the piano. It just made me envision our main character in a wet trench coat taking refuge from the cold rain in a lounge bar after work, with the only thing making noises besides jazz music are the clinking of ice in filled brandy glasses and the low murmur of customers as they discuss about their day. The nighttime aerial shots of the glowing city also just added to the warm atmosphere.

(Unfortunately the Matsuo version has
been taken down so here's Aki Yashiro's cover.)

Anyway, I had an inkling that Ishihara wasn't the original singer of "One Rainy Night in Tokyo" despite the fact that it fits his singing persona perfectly - looking through his huge discography only proved that his version was only a cover, so I decided to search YouTube for the original. Now this is where it got pretty confusing. The results showcased a whole barrage of Mood Kayo singers/groups like the Mahina Stars and Sachiko Nishida (西田佐知子), all of which had "sung" the song. But when I gave them a listen, I realised they were completely different from the "One Rainy Night in Tokyo" I had been enjoying. I then consulted the J-Wiki again, but unfortunately there wasn't an article on the song. Coming back to YouTube, I discovered that the Queen of Mood Kayo, Kazuko Matsuo (松尾和子), had sung it as well, this time, it's the same as Ishihara's one, though more bossa nova - I like this version as well. By then I was quite ready to just throw in the towel and just stop my search there, hoping that Matsuo was the original singer - I was preoccupied with other things at that time. And then, I got the idea of looking up the song's writer and composer.
It turned out that it was done by lyricist Domei Suzuki (鈴木道明). It was then that I finally discovered the original singer of "One Rainy Night in Tokyo", the late Teruko Hino (日野てる子). That was really a huge breakthrough and the relief was palpable. Anyway, like Matsuo's version, Hino's was quicker in pace, quite bossa nova unlike Ishihara's. You can listen to it here.

The original "One Rainy Night in Tokyo" was released in 1963... I think, that was what the J-Wiki page on Suzuki said. The one on Hino's page said it was released in 1965. I'm not sure which is right, so I'm just going for the earlier date. As for Ishihara's version, it was released in his posthumous album "Ishihara Yujiro Aishoka Best 40" (石原裕次郎 愛唱歌・ベスト40) in 2009. I wasn't able to pinpoint when Matsuo sang the song though. 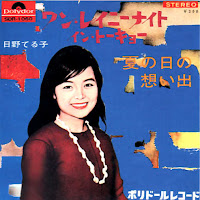 Oh yeah, it rained again today. Thankfully more than that sprinkling on Sunday afternoon. Cooler too.