Oh boy, if the me from 3 years ago could see who my muse is now. I'd probably come after me with a large mallet... but then again, maybe not...? Nah, who am I kidding?

I remember myself saying that Hachiro Kasuga (春日八郎) was my favourite out of the Yonin Shu a few years ago, back when I was more respecting their presence rather than going wild about them. That was, indeed, the case at that point, but the most ordinary fellow in my eyes sort of fell behind when catchy hits and amusing idiosyncrasies from Michiya Mihashi (三橋美智也), Hideo Murata (村田英雄) and Haruo Minami (三波春夫) were brought to my attention. It didn't really help that many of Hachi's hits that were very readily available at the time were the hard to swallow, melancholic enka. Or, at least, it was just my luck that I picked said stuff. 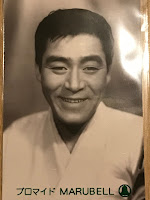 However, my interest in Hachi was revived when I came across this YouTube channel that uploads his lesser known works, of which a good number of them were more my cup of tea. From those, I was able to appreciate his range and versatile ryukoka/pop style of singing that could go from intense and guttural to delicate and light. This contrast, which I grew to love, sounded more obvious in his later days (mid-60's and beyond) when his vocals shifted from a tenor to a baritone. At the same time, I found his songs and vocals good for listening to at any time of the day - not too quiet like Michi's, not too forceful or chirpy like Muchi's or Minami's. That in itself brought Hachi back to the no.1 spot among the venerable four, but, of course, what served as the icing on the cake and ultimately made him muse no.4 was... Well, I believe the bromides above are self-explanatory - I'll be talking about those photos soon, by the way, if you're wondering where they came from... and why I have so many of them. 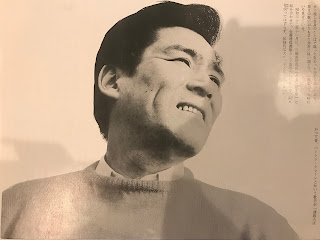 Anyway, since I had been immersing myself in almost everything Hachi for a good half a year, I decided to feature the First Enka Singer on my annual favourite artiste Top 10 (plus or minus). After being exposed to a good number of songs from his 39-year career, it was challenging to pick 10 of them as my favourite and even more so when arranging them in order; I had to choose between recent fads and those I have a history with. As such, there were a couple of ties between a few of my choices, which turned my Top 10 into a Top 12.

That's it for the intro. Without further ado, here's number 10.

9. Otoko no Butai (1955)
"Otoko no Butai" (男の舞台) was one of the more obscure works from Hachi and I got the chance to hear it via his Super Best Album. I soon got hooked by its manly kabuki-inspired score and the cool premises of a play mirroring real life.

A bit of an anecdote here: On my recent trip back to Sugamo (came back just a couple of days ago), I attempted "Otoko no Butai" at the Mukashi no Uta no Mise karaoke joint as my first song (because why not?). The two oldies present for my second swing at karaoke weren't familiar with "Otoko no Butai" at all. They did, however, think that this was my Juhachi-ban (best song in one's karaoke repertoire... and no, I don't think it is) and were perturbed that a young character could like an ancient figure in Japanese music.


8. Nigate Nandayo (1957)/Ashita no Tameni (1969)
The first tie is between two of my three Hacchan o-enka, "Nigate Nandayo" (苦手なんだよ) and "Ashita no Tameni" (明日のために... link to the song's video is here). The former about a struggling nagashi being consoled by his audience was a definite contender for this list as, similar to "Akai Lamp no Shuressha", I have a history with it, and it's even in my "Enka-ragement Song" list. The latter, on the other hand, had me sitting on the fence until the very last minute. The pop-oriented "Ashita no Tameni" was one of my relatively recent finds, but I couldn't ignore the hopeful lyrics that struck a chord with me, so I had to include it in this list, hence the tie.


7. Uramachi Yakyoku (1954)
In my opinion, "Uramachi Yakyoku" (裏町夜曲) has one of the best opening lines in Kasuga's songs. It's like Takashi Hosokawa's (細川たかし) "Kokoro Nokori" (心のこり) where the characters call themselves fools, and it's just as amusing. Well, but that aside, I found the rest of the words pretty sweet as the imperfect protagonists find comfort in each other's company. I'm also fond of the jolly melody and Hachi's smoothly fluctuating vocals.


6. Ore wa Nora Inu (1957)
Coming in at no.6 is somewhat of an underdog, if you will. I first discovered the old-fashioned, almost waltz-like tune that is "Ore wa Nora Inu" (俺は野良犬) when watching a clip from one of Hibari Misora's (美空ひばり) films where Hachi played a side character of some sort singing this very song. Initially, I thought of the B-side to his decently popular "Gomen yo Kanben na" (ごめんヨかんべんナ) as simply OK and was more keen on seeing a young Hacchan performing. That view soon changed as it burrowed deep into my brain and got stuck on constant replay very often (like now). Because of that, "Ore wa Nora Inu" was another of my karaoke choices and I felt that I tackled it better than "Otoko no Butai".

5. An' Tokya Doshaburi (1957)
From songs and films, there always seems to be something about the pouring rain that makes love more passionate, but on the flip side, it also makes breakups more sour. "An' Tokya Doshaburi" (あん時ゃどしゃ降り) is an example of that, where our lead reminiscences about his first love in the rain. It actually reminds me of "Hajimari wa Itsumo Ame" (はじまりはいつも雨), except it's kayo-fied and, just like almost all enka, bittersweet. It's still pretty romantic (I'm a sucker for stuff like that) and the dramatic melody that mimics sounds of a thunderstorm with those blaring horns is a nice touch... Just saying, but I'm all for Mrs Watabe's song request in the video above.

4. Otomi-san (1954)/Hyotan Boogie (1955)
The second song that further deepened my interest in this enka veteran, "Otomi-san" (お富さん), did make it into my list, as well as its similarly jaunty albeit Western-flavoured cousin I got to know in Sugamo last year, "Hyotan Boogie" (瓢箪ブギ... link to song's video is here). I can't help it, these couple of songs about a kabuki play character and a sake-producing waterfall respectively are just too catchy to pass up. They also happen to be my "Laundry Songs"; I tend to be humming/singing both ditties to pass the time when doing the necessary chore, more so "Otomi-san" for its simpler, less tongue-twisting stanzas and slightly slower, more rhythmic tempo.


Gotta love that grin and those dimples.

3. Ano Hoshi to Katarou (1965)
If Muchi came up with something incorporating Group Sounds in the mid-60's, I guess it shouldn't come as that much of a surprise that the pop-oriented Hachi would also have done the same. "Ano Hoshi to Katarou" (あの星と語ろう), a very deeply buried gem in his discography, was the enka veteran's take at this contrasting genre. It was the combination of the bright melody with its nice beat and screaming trumpets, and his nearly operatic delivery that made me fall in love with what is essentially a bokyo tune in a flashy skin. I wish I could see Kasuga performing this song. He was generally quite stiff on stage save for some occasions where he'd be pointing at something or bouncing up and down on his toes, so it'd be a treat to see him groove to "Ano Hoshi to Katarou" - guy couldn't have stood completely still to a song like this, right...?

2. Hatoba de Machi na (1966)
There was a bit of consideration involved when selecting which song were to sit at 3rd place and which in 2nd as delivery and music-wise, I like them both a great deal. However, as you can see, the optimistic and mambo-themed "Hatoba de Machi na" (波止場で待ちな) ended up taking the silver medal while "Ano Hoshi to Katarou" settled with bronze. The deciding factor? Just as with song no.5, it's the romantic premises, although this one is a lot sweeter than bitter. The couple are understandably torn up over the fact that the fellow has to leave, especially after he learns of her feelings towards him, but the silver lining comes as he utters the golden "Wait for me (at the harbor)." Ah, dang it, it's too cute.

1. Yama no Tsurihashi (1959)
With all the competition it had to face from the other contenders in the list, I still deem "Yama no Tsurihashi" (山の吊橋) as my favourite Kasuga-bushi of all time. Overall, it's a jolly little tune that never fails to lift my spirits - hearing it feels like taking a nice stroll in the great outdoors. That being said though, I don't think I did it much justice at Sugamo. The key was alright, but I'm just quite terrible at tackling very low notes; I don't think I could be heard all that well at the middle bits of the stanzas... Sorry, Hachi. Well, at least one of the old folks found me enough of an odd rarity to want to have a photo taken with me. I felt honored. 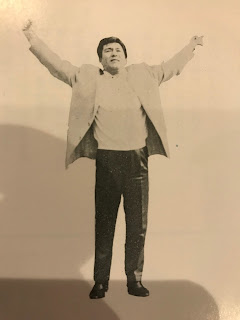 Well, it's been a long article. I hope you enjoyed it. Thanks for taking the time to stick through (or simply read a bit of it) - now you know why I'm such a fan of one of the singers who built the genre of enka. 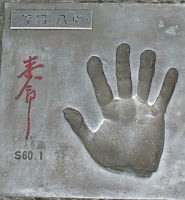 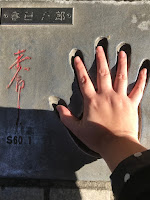 He had large hands. My hands are tiny, though.
Posted by Noelle Tham at 3:58 AM