It's been raining quite a lot recently in Singapore - the early January weather has been pushed back to now. Can't complain, with it cooling the place down to temperatures as low as 24°C during the day and bringing along some chilly winds. It feels good to be able to walk to and fro from the train station to work without breaking a sweat, and not feel like you're being baked like a pineapple tart in a relative's house during Chinese New Year visits.  Also, I find that it's the perfect time for rain-related songs such as Hachiro Kasuga's (春日八郎) "An' Tokya Doshaburi" - overcast skies, rain-streaked windows, and (at night) puddles reflecting light from lamps/buildings provide a better ambiance.

This 1957 single from the First Enka Singer had its words written by Ryo Yano (矢野亮) and the music done by Toshio Saeki (佐伯としを). "An' Tokya Doshaburi" sounds like a short form/slang for "Ano Toki Doshaburi" and translates to something on the line of "It was raining at that time". Here, Hachi sings about our main character reminiscing about his first love during a downpour - t'was during such a scenario where they met, and later when they broke up. He seems to still have some feelings for her judging by his bitterness, and wonders how she's doing in the present. That's some romance flick stuff right there. Going on to a tangent here but to make this more "Hollywood", in the present timeline, his first love should appear - they recognize each other, he runs up to her (in the rain, of course) and gives her a tight embrace, then they express their ever-present feelings for each other before walking off into the night as a happy couple once again... in the rain. Cliche, but pretty sure it'll still sell.

Coming back to the song, I thought Saeki's score sets the scene well as it sounds like the skies just opened up - the booming horns are like thunder and the crashing cymbals are like the pitter-patter of the rain on the ground.

"An' Tokya Doshaburi" seems to be decently popular since there are a number of covers of it in the recent years by the younger enka singers like Hiroshi Miyama (三山ひろし) and Konomi Mori (杜このみ), whose version I put up. 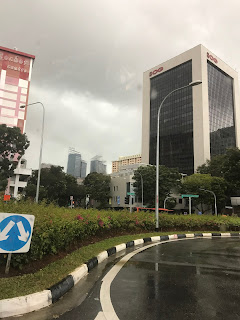 Happy Chinese New Year to you guys!
Posted by Noelle Tham at 5:53 AM