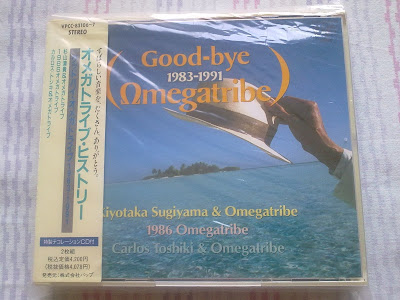 Recently, I’ve been listening to Omega Tribe (オメガトライブ) on a regular basis, in all of its incarnations, thanks to the amazing “Good-bye Omega Tribe 1983-1991” compilation I won in an auction. Their professionalism and polished music is truly astonishing, which makes many of their songs classic standouts. In fact, a lot of them were already covered here in Kayo Kyoku Plus by J-Canuck. Songs like “Summer Suspicion”, “Futari no Natsu Monogatari” (ふたりの夏物語), “Kimi no Heart wa Marine Blue” (君のハートはマリンブルー), “Kimi wa 1000%” (君は1000%), “Super Chance”, “Stay Girl, Stay Pure”, “Crystal Night” and the amazing “Aquamarine no Mama de Ite” (アクアマリンのままでいて) are surely among my favorites, but today I wanted to bring other tunes I’m not capable of skipping while listening to them.


Starting with the band’s first incarnation, Kiyotaka Sugiyama & Omega Tribe (杉山清貴&オメガトライブ), “Asphalt Lady” is one of their most emblematic songs, and also their second single, released in October 1983. Included later in the band’s sophomore album “River’s Island”, from March 1984, it follows that subdued disco pattern of Omega Tribe’s early hits. It also introduces a more epic route, with a vigorous city feel and great arrangement comprised of the fantastic fat bass, strings, horns and the anthemic guitar.  Truly a different side of the band originally not seen in the melancholy portrayed in debut’s “Summer Suspicion”.

Following with another gem from the early years, here’s “Glass no PALM TREE” (ガラスのPALM TREE), the final single with Sugiyama’s lead vocals, which was released in November 1985. Different from the more urgent and shining “Asphalt Lady”, “Glass no PALM TREE”, follows a cooler and mysterious vibe during the verses, even if it stills unleashes a melodic nostalgy-fueled chorus. On a side note, I’ve always been curious about Sugiyama’s reasons to leave the band, since he basically continued recording that same type of smooth City Pop music.


Released as a single in October 1988, “REIKO” is probably the most different song from this particular selection, since it’s not into the band’s traditional City Pop sound, relying in a more typical 80s American funky sound. It’s funny because, even though it loses Omega Tribe’s unique feeling in favor of a more generic dance sound, it sounds like a positive innovation to the band. It also turned into one of my favorite songs from them, thanks to the arrangement (and yeah, I hear a nod to Earth, Wind & Fire’s “Let’s Groove” in some parts, but that's okay), even if the lead vocals were commanded by neither Kiyotaka Sugiyama nor Carlos Toshiki, but by American member Joey McCoy (just like RA MU [ラ・ムー], Omega Tribe was quite multiethnic in the late 80s, which is another interesting thing about the band).


Not released as a single, but part of 1989’s “Bad Girl” album, “Miss Dreamer” is a bouncy song by Carlos Toshiki and Omega Tribe (カルロス・トシキ&オメガトライブ) with a catchy chorus and a great vocal performance by Carlos Toshiki. It’s interesting to notice how, by 1989, the band was changing their sound a little bit. Unfortunately, they were not able to pursue such growth since the 80s were already ending and their songs were kind of difficult to transcend. In the case of “Miss Dreamer”, it’s full of 80s glory, such as the horns, wild guitar solo, synths sprinkling through the arrangement and an explosive chorus. Great non-single cut, for sure.


My last song on this list is “Doushite Suki to Ittekurenaino” (どうして好きといってくれないの), which is a return to the typical Omega Tribe sound with that melancholic vibe. As it was released in July 1989, I immediately feel even more nostalgic, because of how ‘the end of an era’ that particular year represented. The song helps a lot, and it’s one of their most natsukashii-sounding songs since Kiyotaka Sugiyama left the band. About some specific details, the verses are what I like the most in this song (I usually like the verses even more than the choruses in Omega Tribe’s songs), but the expansive horns are great as well.
Posted by Marcos V. at 2:26 PM