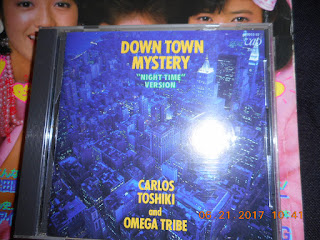 Summer has begun. I've already brought in the beer-friendly TUBE for the season so it's time to also bring in the mellower mineral water/cocktail side of summer J-Pop via one of the incarnations of Omega Tribe, namely 1986 Omega Tribe（1986オメガトライブ）. I listened to the above album "Downtown Mystery ~ 'Night Time' Version" yesterday and it was the nostalgic 80s of the season once more.

The song here wasn't placed on that particular album but it was the title track for 1986 Omega Tribe's 2nd album "Crystal Night" from February 1987. Carlos Toshiki（カルロス・トシキ）is at the mike for his light and creamy delivery of some nighttime light funk. Ahhh....I can see the Mai Tai being served in front of me right now. It may have been guitars for TUBE but it's those crystalline synths for Omega Tribe.

"Crystal Night" the song was written by Toshiki and Koichi Fujita（藤田浩一）and composed by Tsunehiro Izumi（和泉常寛）for the album which peaked at No. 1.


Basically when I see any Japanese song from the 1980s with the word crystal in the title such as this one here, all of the pop images from that decade come flooding into my head ranging from the neo-zoot suit fashion for the guys and the big hair for the gals to the bright-lights-big-city feeling. Perhaps that is because of a 1980 novel that I had heard about years ago while in university titled "Nantonaku Crystal"（なんとなく、クリスタル...Somehow, Crystal）by Yasuo Tanaka（田中康夫）, who would later become the governor of Nagano Prefecture in the first half of the 2000s. The story involved a college kid and a part-time model living their modern Tokyo lives and apparently according to the review of the novel, Tanaka even provided tons of footnotes about the various products and cool places that the reader "needed" to know.


I never read "Nantonaku Crystal" but it seems like it can be treated as an indictment of the empty materialistic society of modern-day Japan or as a bible for the kakkoii kids at the time. In any case, I'd be interested in taking a look at an English translation of it just to confirm what was big in those early days since I had my first, brief and ultimately everlasting taste of it during my summer trip in 1981 there. Strangely enough, perhaps all those Future Funk/Vaporwave videos up on YouTube might reflect what Tanaka had been up to decades ago.

It's kinda ironic, though...supposedly Tanaka took some sneering swipes at aspects of the domestic pop culture in lieu of the "superior" Western stuff such as music in his book while I am the fellow who absolutely embraced the former (and the latter)!

You can take a look at the review of "Nantonaku Crystal" here.
Posted by J-Canuck at 10:20 PM