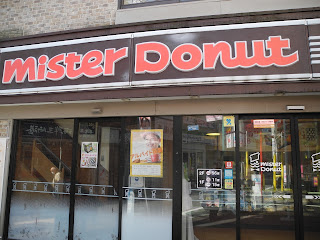 Of course, here in Canada, we've got Tim Horton's. It's not technically a Canadian company any more since it's majority-owned by Brazilian/American investment firm 3G Capital, but heck, we can still dream about the man the donut-and-coffee emporium was named after, the late Toronto Maple Leaf Tim Horton. Over in Japan, I think the leading donut place is still Mister Donut even with that craze over Krispy Kreme and other gourmet donut establishments almost a decade ago. There was even one branch by my old subway station, Minami-Gyotoku. 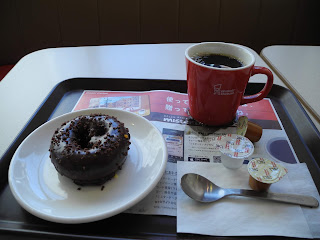 When I was visiting Tokyo in 2017, I decided to stop by for a morning snack at the Shimo-Kitazawa branch of Mister Donut. I ended up with a straight coffee and a double-chocolate donut. Compared to the yeast-raised donuts at Timmies, Mister Donut's donuts are more on the cakey side. It's all good!


Anyways, my donut-filled pre(-r)amble has nothing to do with the song here; I was just musing wistfully. But speaking of wistful, I would like to introduce this really pleasant ditty, "Ni-juu-kyuu-sai" (29 Years Old) by the musical duo Tokyo Q Channel (or TQC, for short). Enjoying a short run between 1994 and 1998, the band's name does sound somewhat like a home shopping network but it was indeed a singing act comprised of vocalist Mayumi Sudo（須藤まゆみ）and keyboardist-guitarist-composer Yasuhiko Warita（割田康彦）.

"Ni-juu-kyuu-sai" comes from TQC's first of two albums "Switch On!" which came out in June 1995. With Sudo and Warita creating the song on their own, it sounds more like a tune from a decade back, maybe more along the lines of something that Hiroshi Sato（佐藤博）or Katsuhisa Hattori（服部克久）in AOR mode would create in the 1980s. All those wonderful strings and twinkly keyboards surround a story of a young lady looking back as well as forward while she is in her final year of her twenties. Sudo has that lovely crystalline voice and my compliments also go out to Warita. "Ni-juu-kyuu-sai" doesn't seem to reflect any regrets and is very uptempo...perhaps just the song to adorn an Iwaki Credit Association commercial which it did.

Although there is a J-Wiki bio for Tokyo Q Channel, there isn't much outside of their discography. I found out that the duo had released eight singles along with their two albums. But Sudo and Warita have their own articles from which I did discover that Sudo is from Gunma Prefecture, has backed up a number of other singers such as Miki Imai（今井美樹）and Maaya Sakamoto（坂本真綾）, and has sung a lot of other commercial jingles. Meanwhile, Warita, who also hails from Gunma, was discovered by composer Tetsuji Hayashi（林哲司）in 1990 after which Warita made his own debut as a composer. He has created melodies for acts including SMAP, Ribbon and Hikaru Genji（光GENJI）.