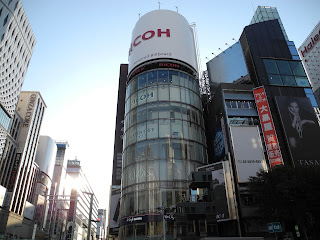 Always a grand area. Even if folks have said that since the Bubble burst and the 2011 earthquake, the lights of Ginza haven't been the same, I've never particularly agreed with the opinion that Tokyo's most famous neighbourhood has lost its gleaming luster. It's still a fine walk, day or night and whether or not the street is closed to vehicular traffic for its weekly pedestrians' paradise.


With the title of "Ginza Blues", I would have thought that this would have been an easy single for the Mood Kayo group Akira Kurosawa & Los Primos（黒沢明とロス・プリモス）. After all, this was the group that performed a number of Ginza-based tunes such as "Ame no Ginza"（雨の銀座）and "Tasogare no Ginza"（たそがれの銀座）. However, it was included as a track on (I'm assuming) their February 1970 album, "Sakariba no Yoru ni Utau"（盛り場の夜を唄う...Sing to the Night on a Busy Street）, although the YouTube video just has "Yoru ni Utau" as the identifying album.

The song also did sound rather familiar, then I figured it out. "Ginza Blues" had been recorded previously in the 1960s and by a number of different artists. In fact, I had already written about the ballad just a few months earlier with Hiroshi Wada & Mahina Stars（和田弘とマヒナスターズ）and Kazuko Matsuo（松尾和子）, among others. But what I found out was that the cover version by Los Primos, compared to the jazzier and swingier versions by those from the other article, has more of an intimate Latin feeling especially with that lone guitar. I imagine, for example, that the Mahina Stars and Yujiro Ishihara（石原裕次郎）would have performed their covers in a classy brightly-lit supper club in Ginza while Los Primos would be in closer surroundings with the spotlight placed right on them.
Posted by J-Canuck at 10:14 PM