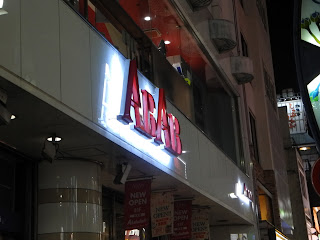 Good heavens! How natsukashii...the old ABAB (pronounced a-bu-a-bu) department store in Ueno. When I was working my first 6 months at NOVA, I was stationed at one of the main schools in the area, so I used to pass by the store all the time. If I'm not mistaken, there was also a crepe shop at the storefront. As far as I know, ABAB is still there.


Well, let's go for a bit of Friday natsukashii here, too. I've found this song by underrated singer Shoko Sawada（沢田聖子）called "Kon'ya no Kutsu wa Fumihazushite" (Take Your Shoes Off For Tonight) which was a track on her 9th album "Ingenue" from July 1984.

Listening to it a couple of times now, I got that feeling of an Eikichi Ohtaki（大瀧詠一）tune thanks to that gently lilting 50s/60s arrangement, but actually it was composed by Eiji Nishiki（西木栄ニ）and written by Junko Sato（佐藤純子）. Having known about Sawada ever since my "Sounds of Japan" days, I think she has that wonderful crystal voice and so it's been too bad that she didn't seem to get more of a profile boost than she did. As I mentioned in my very first article on her, there were comparisons between Sawada and superstar aidoru Seiko Matsuda（松田聖子）because of age and the same kanji in their first name despite the different pronunciations, and to be honest, considering Ohtaki's work with Seiko-chan in the past, listening to "Kon'ya no Kutsu wa Fumihazushite", there is something quite Seiko-ish about the song as well.

It's a bit ironic, isn't it? Back in the late 1970s and early 1980s, there was a section of kayo kyoku that was in love with the pop stylings of the 1950s and 1960s, and here I am listening to these very songs because of their nostalgically pleasing effect.
Posted by J-Canuck at 3:25 PM