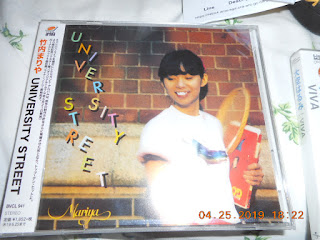 "Kayo Kyoku Plus" collaborator JTM returned from a long overdue trip to Japan a few weeks ago, and he was magnanimous enough to give me a couple of CDs including a remastered version of Mariya Takeuchi's（竹内まりや）2nd album "University Street" originally released in May 1979. This one has the original ten tracks along with live versions of three of the tracks and the single version of "Dream of You".


Now, I wrote the article for "University Street" back in October 2015 but there were two remaining tracks that I hadn't covered so this is a follow-up. So to begin the wrap-up, here is "Hold On"（ホールド・オン）which was written and composed by Masamichi Sugi（杉真理）and arranged by Ichizo Seo（瀬尾一三）. This is a lovely sunset sort of ballad about getting through that tough period following a romantic breakup.

Takeuchi plumbs beautifully through the lower range of her voice, and the whole song reminds me of those laid-back pop tunes of the 1970s with a bit of country in there. The band Eagles comes to mind and so does Michael Johnson's "Bluer Than Blue" which was released in 1978. "Bluer Than Blue" made frequent appearances on AM radio back then.


According to the liner notes for this remastered "University Street", lyricist and composer Taeko Ohnuki（大貫妙子）created "Kaeranu Omokage"（かえらぬ面影...The Face That Won't Return）as something to specifically fit the university theme for the album. I don't have a total grasp of Ohnuki's lyrics but it seems as if the protagonist is just about to give up on getting the attention of her crush on campus and instead actively look for someone new. There is something quite comical and nostalgically romantic in the arrangement by the Yutaka Hosoi Band（細井豊 BAND）. Hosoi himself is a member of Sentimental City Romance（センチメンタル・シティ・ロマンス）who had helped out on Takeuchi's debut album "Beginning".

With all of the attention on "Plastic Love" globally over the past year, it's nice to listen to the earlier material by Takeuchi with her initial stylings in country-pop and 1950s/1960s pop. 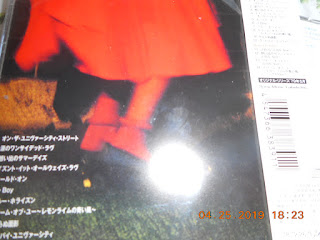