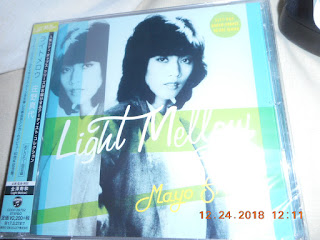 The "Light Mellow" series of compilation discs has showcased various City Pop/J-AOR artists over a few decades, and several of their songs have already made it up to the pages of this blog. However, the series has also done their own spotlight on specific singers as well, and one of them is singer-songwriter Mayo Shouno（庄野真代）.


I can say that her most famous song is "Tonde Istanbul" which I've described as being one of those tunes that was part of a small late 1970s trend in so-called exotic kayo expressing travel in places far afield from Japan. And for me until recently, "Tonde Istanbul" was really the only song by Shouno that I had known until I basically got into the blog. But in the last few years, I realized that not only did she often write her own tunes but she also created songs that spanned a few genres such as AOR and City Pop. So when I found out about a tribute to her by the good folks at "Light Mellow", I took a listen to the samples and ended up getting the CD back last Xmas.

So, without further ado:

Now, to be honest, I could only find a fraction of the nineteen above to feature here since some of those that I couldn't find are pretty darn good. However, I will endeavour to do my best. Incidentally, Shouno's collection here, though released in September 2016, includes her music from the mid-1970s into the early 1980s.


There are a couple of covers here with one of them being Shouno's take on "Chuo Freeway", the classic Yumi Arai（荒井由実）song that has also been covered by vocal group Hi-Fi Set（ハイ・ファイ・セット）. This was actually Shouno's 3rd single from April 1977, and aside from a slightly peppier opening and a nice sax solo, it has basically retained its breezy 1970s City Pop flavour from the original and the Hi-Fi Set version. The other kayo cover was Keiko Maruyama's（丸山圭子）"Douzo Kono Mama" but unfortunately I couldn't find that one on YouTube.

As for a little background on Shouno, she was born in the city of Osaka. She was often sick when she was a little girl, but she did learn how to play the organ and became very active from elementary to senior high school, including diving happily into student council activities in junior high. Furthermore, even though she didn't pass her entrance examination to get into university, she kept up her music-based activities including getting into the Yamaha Music Foundation.

However, just when she was about to give music up at the age of 20, she entered a competition during a folk music festival and was able to get beyond the preliminaries and then won the regional grand prize. Getting scouted in 1976 by Columbia Records and selling a debut LP titled "Atelier"（あとりえ）, Shouno then aimed to become a singer in the New Music genre with an emphasis on urban contemporary.


Shouno's 7th single was "Masquerade" from November 1978, released six months after her big hit of "Tonde Istanbul". The song, written by Machiko Ryu（竜真知子）, composed by Kyohei Tsutsumi（筒美京平）and arranged by Ichizo Seo（瀬尾一三）, starts off with a natsukashii disco beat and maintains it for most of the song although the refrain takes things into some Latin. It may have had some influence from Barry Manilow's "Copacabana". "Masquerade" was also the title track for her 5th album which came out a month after the single.


"Adieu" was Shouno's 9th single from September 1979 which was written and composed by the singer with Seo behind the arrangement once more. Sounding like an after-hours (as in the sun is about to rise) mid-tempo ballad, Shouno relates the bittersweet story of a woman meeting an old flame by accident and realizing that the good ol' times cannot come back. Simultaneously sad and classy, Shigeru Suzuki（鈴木茂）was on guitar with Tsugutoshi Goto（後藤次利）on bass. "Adieu" was included in her 1979 album "Shisenritsu ~ Ballad"（私旋律（バラード）...Private Melody）.


"Hey Lady Yasashiku Nareru kai" (Hey Lady, Can You Be Nice?), Shouno's 11th single from February 1980, has slightly more of a good-time rock n' roll vibe to it. This was also written and composed by Shouno, and was used as the campaign song for Pola Cosmetics. Following her hits of "Tonde Istanbul" and "Monte Carlo de Kanpai"（モンテカルロで乾杯）, this song was Shouno's third Top 10 hit, peaking at No. 6 on Oricon and selling around 280,000 records. It also ended up becoming the 51st-ranked single of the year.

As I mentioned above, although there are other Shouno songs on YouTube, those ones didn't get onto the BEST album. However, I will be more than happy to explore those in the near future especially those represented on her 1978 album "Refrain"（ルフラン）. And hopefully, I've been able to show that Shouno did cover a wider musical territory than would have been assumed just on those first two Top 10 hits from the previous paragraph. She has continued to release singles now and then over the decades, and she is currently a trustee for the NPO Musicians Without Borders.
Posted by J-Canuck at 9:05 PM