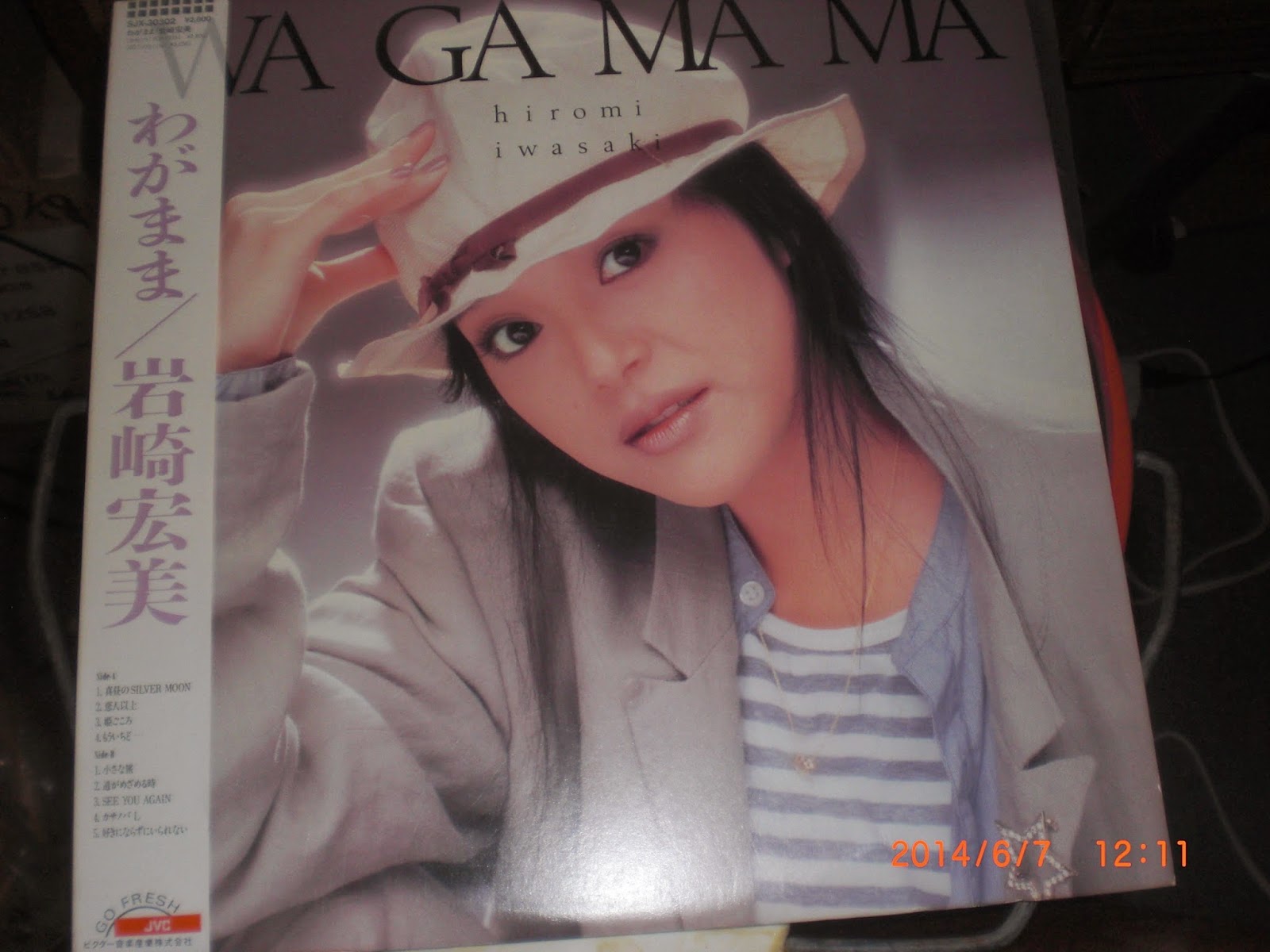 (Regrettably, all music163 links are now dead but Tower Records and iTunes can at least provide excerpts of the tracks.)

Hiromi Iwasaki's（岩崎宏美） "Wagamama" (Selfish) is her 17th album from July 1986, and it's also another one of my treasured purchases from Wah Yueh. Having become a convert to the cause since 1981, I was just so happy when my brother got me "Madonna Tachi no Lullaby"（聖母たちのララバイ）in 1982 and then a couple of her audiotapes via Mom when she visited Japan in 1985. But I was at the mercy of people actually going over to the country to get the albums...not the most inexpensive or the most logistically easy method. So you can imagine my joy when I discovered that Wah Yueh, my go-to record store in Chinatown during my U of T days, sold the most recent Iwasaki albums. Mind you, the albums weren't cheap but for Iwasaki, the sky was the limit. And especially when the then-27-year-old had that adorable Diane Keaton-in-"Annie Hall" (without the tie, mind you) look on the cover of "Wagamama", I was more than ready to throw my $20-dollar bills at the cashier.

First off, I'm afraid none of the songs listed for today's entry from the album have representation on YouTube, so we'll be relying on the good people at music.163.com today. My impression of "Wagamama" is that among all of the albums I've collected of the singer over the years, this album is probably the most adult contemporary in music and the lyrics all deal with simple adult romance. Case in point is the opening track above, "Mahiru no Silver Moon"（真昼のSILVER MOON...High Noon Silver Moon）, a dreamy jazz ballad that, despite the title, comes across as solidly nocturnal. I rather went "Oooh..." on hearing the first few measures and the opening words of "Day dream of you...." It's something that I could hear on the deck of a cruise liner in the middle of the Atlantic under that titular moon at night (and no, there is no threatening iceberg in the offing here). Keisuke Yamakawa （山川啓介）was responsible for the lyrics while Etsuko Yamakawa (山川恵津子）not sure if they are related or married in any way) came up with the wonderful danceable-on-the-Lido Deck music. The two Yamakawas took care of the songwriting duties for most of the tracks. And once I heard "Mahiru no Silver Moon", I knew I was in good hands.

"Koibito Ijou"（恋人以上...More Than Lovers）continues the adult contemporary theme as Track 2. However, it has a difference in that the music has that feeling of sailing on the Riviera and Julio Iglesias at the same time. And Keisuke puts on a different slant on the usual theme of love in that it doesn't deal with heartbreak or with a couple deeply in love, but about a second chance at it with an old friend who had come to the rescue after that initial heartbreak. Y'know, I think it could even have made for a nice little entry for stage actress Iwasaki to croon in a musical.

Track 3 is "Hime Gokoro"（姫ごころ...Heart of a Princess）. This time, the songwriting duo here were Arisu Sato and Yuhei Hanaoka（佐藤ありす・花岡優平）, and the track takes on a more dramatic and urban atmosphere somewhat along the lines of an Anzen Chitai （安全地帯）song. It was the B-side to Iwasaki's 42nd single, "Saisho no Koibito Tachi"（最初の恋人達...The First Lovers）which was released in April 1987 and only got as high as No. 84 on the Oricon weeklies.

On the B-side of the album, there is "Michi ga Mezameru Toki" （道がめざめる時...When The Road Wakes Up）which was again created by the Yamakawas. I think it's probably Iwasaki's way of channeling Mariko Takahashi（高橋真梨子） in terms of the music as she sings about just enjoying life through that drive with her beau and not worrying about pushing things in their relationship too quickly. Compared to the other tracks, it's arguably the purely pop song of the album.

Then, there is the 2nd-last track of the entire record, "Casanova L"（カサノバL）, which is a Big Band riff on another song, "A Night In New York" that provided a one-hit wonder over here in Canada and the United States earlier in the 80s in the form of Elbow Bones and the Racketeers. Etsuko Yamakawa had the music but it was Goro Matsui （松井五郎）with the words about that Manhattan party flowing with champagne and dancers.

Another song that was also included on the album was "Chiisana Tabi"（小さな旅）that I have already profiled. As I mentioned in that article, Iwasaki sang a lyricized version of the theme for one of NHK's most famous travelogue programs.

"Wagamama" managed to get as high as No. 32 on the album charts. I'm happy to say that the LP is still on the rack here, but during my time in Japan, I also decided to buy the CD version which also contains several karaoke tracks of Iwasaki's more kayo kyoku efforts from the past along with three other bonus tracks. Iwasaki had another album back in 1980 titled "Wish" which had been produced in Los Angeles and also tended toward a City Pop feeling. I also got that CD but I think "Wagamama" was her more successful effort in the urban contemporary field.