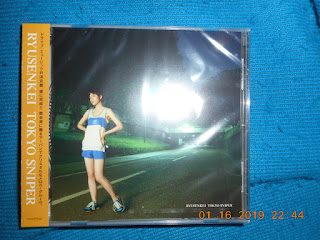 The past round of Holidays had me going on a slightly larger shopping spree than usual, and I decided that this time, I would focus some more on getting the Japanese urban contemporary stuff in the 21st century. Of course, that meant I had to get Ryusenkei's（流線形）"Tokyo Sniper" which was their 2nd album and their first full album from October 2006. I know the saying "You can't tell a book by its cover", but hey, as I've mentioned on the articles for the two tracks that I've already talked about on "Tokyo Sniper", the album cover of the perhaps annoyed jogger on a nighttime street is one of the most remembered for me when it comes to the newer City Pop material. I mean, the cover can reach meme levels and it seems to beg for a rash of funny captions such as "Geez, was the marathon at 10 am or 10 pm?!" or "If he doesn't show up in the next five minutes, I really will become a Tokyo sniper!".

Anyways, I ended up getting 9 discs this time around, which kept my mailman calling me up on the phone, but I have to say that "Tokyo Sniper" was indeed one of the albums that stood out. Before I get into some of the tracks, I would like to introduce the members of Ryusenkei: there is guitarist Cunimondo Takiguchi（クニモンド瀧口）, bassist Takehiro Oshizuka（押塚岳大）and keyboardist Yuzo Hayashi（林有三）. Also, there is the vocalist who is front and centre on most of the tracks, Hitomitoi（一十三十一）, under her guest name of Nika Eguchi（江口ニカ）. 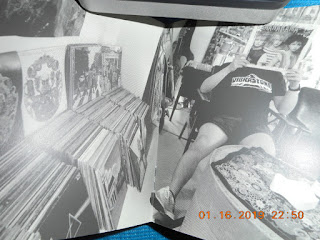 I've listened to "Tokyo Sniper" twice now including the tracks, all written and composed by Takiguchi, that I've already written about on KKP, "Time Machine Love" and "Rainbow City Line", and I've come to the conclusion that Ryusenkei was sending a love letter to the urban contemporary/AOR music of the past on both sides of the Pacific. Case in point is Track 4, "Koi no Last Number"（恋のラスト・ナンバー...Love's Last Number）, which is very Steely Dan. But then I have to correct myself because it isn't strictly Dan. It actually sounds like a riff from "New Frontier", a song from "The Nightfly", the legendary 1982 album by Donald Fagen, one-half of the famous duo. Right from Note One, it has that shuffle/strut beat and the warm keyboards. In fact, Hayashi even plays with us Fagen fans by copying the first few notes from "New Frontier" near the end of the song which delves into a lady hoping that her beloved will finally show up for that final dance number at the hall.


"Usumurasaki Iro no Achira"（薄紫色の彼方...The Purple Beyond）is a soulful and groovy ballad slightly reminiscent of the 1970s, thanks to Hayashi, but I also have to give kudos to some of the drum work by Yuko Kitayama. Although Nika doesn't sound anything like her, that keyboard work reminds me of the music by singer-songwriter Toko Furuuchi（古内東子）back in the 1990s. The song is a sad story of a woman who comes to the realization while in the passenger seat of a Porsche that her love for the driver, her friend, will remain forever one-sided as the sun sets into purple.


Meanwhile, the title track, "Tokyo Sniper" seems to sound like another light tribute to a City Pop song from decades past, "THE TOKYO TASTE" by Rajie and Yoshitaka Minami（南佳孝）. Nika even does the duet with Hiroshima-born guitarist Saigenji. There is some nice keyboard canoodling near the end, and like "THE TOKYO TASTE", "Tokyo Sniper" would make for a good background number to strut through the hotel area of West Shinjuku or even a nice song to drive in that convertible on a warm spring night.


My final song for tonight and the final track on "Tokyo Sniper" is "Ame no Cinderella"（雨のシンデレラ...Rainy Cinderella）which is some lovely musical advice from Nika about how to not be afraid of love and embrace it for what it is. Nika sounds especially mellifluous with this torch song given some contemporary groove, and the rolling song reminds me of Minako Yoshida's（吉田美奈子）"Koi wa Ryuusei" (恋は流星）, right down to the various horn solos and even the chorus work. It is a love letter about love to love, and hopefully without any reversions to pumpkins and mice.

Hard to believe that it's been over a little over 12 years since "Tokyo Sniper" was first released, but it is definitely a keeper for those who love City Pop no matter which decade it comes from. There are three more tracks to cover, but I will keep those in store for their individual articles...just because. If you can read Japanese, there is also kaz-shin's article on the album as well on his "Music Avenue" blog.
Posted by J-Canuck at 11:31 PM