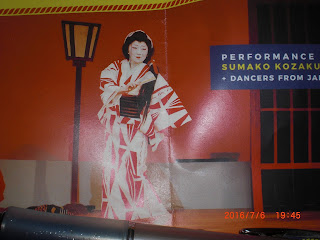 This afternoon, I was invited up to the Toronto Buddhist Church to watch my friend of 30 years' standing perform Japanese dance at an annual buyokai. Under her stage name of Sumayuu Kozakura（小桜すま悠）, she came out like a warrior with an expression and a katana that brooked no argument. Her husband, who was sitting beside me in the audience, agreed that she was not someone to cross in that performance.


My university buddy was portraying that familiar of Japanese fictional figures, the powerful lone wolf samurai while the enka ballad "Ohkami" (The Wolf) was being played. Not surprisingly, it was sung by the manly-man enka legend himself, Saburo Kitajima（北島三郎）. Wolves would seem to be a favored animal for Kitajima since I also recently wrote about a song that he himself had written for Takeshi Kitayama（北山たけし）titled "Byakuya no Ohkami"（白夜の狼）in 2013. This "Ohkami" though was a song for Sabu-chan himself with him providing the music that fit the mood: twangy electric guitar, mariachi-like trumpet and rumbling bass tones throughout. Kyosuke Kuni（久仁京介）wrote the lyrics about the lupine warrior taking his knocks through life today so that he can win tomorrow. Y'know, "Ohkami" could work as an inspiring tune for those Japanese Olympians.