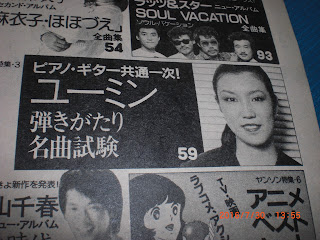 For those superhero & kayo kyoku enthusiasts out there, does everyone remember that famous "Action Comics" Issue No. 1 circa 1938 which introduced Superman? Well, according to an online article from a couple of years ago, a "pristine" copy (and I do agree with putting up the quotation marks...how can anything that old be pristine unless it got a near-lethal dose of Botox?) of Issue No. 1 sold for $3.2 million via an eBay auction! I hope the fellow who bought (or invested in) it had that lead-lined Baggie or vault to store his acquisition.

This begged the question of what the most expensive J-Pop album that I have ever purchased was. Well, I remember that I did get that double-CD BEST album of Hitomi Tohyama（当山ひとみ）at Tacto for about 5,000 yen but I don't consider that a crazy collector's snag. There was another CD on the shelves there for a Mai Yamane（山根麻衣）disc that was going for 8,000 yen! I wasn't sure whether it was covering her earlier City Pop days or her later rock stuff or was spanning both periods. All I knew was that as much as I was curious about the singer, that CD was just too much cholesterol for my blood.

Now the reason I bring up this thing about rare releases and their corresponding costs is that I was looking for a new Yuming (ユーミン) tune to put up onto the blog when I came across "Shiokaze ni Chigirete" (Torn Apart by the Sea Breeze) which came out in May 1977. This was the singer-songwriter's first single (her 8th) since she switched names from Arai to Matsutoya when she got married. Perhaps that fact would have been reason enough to everyone go bonkers and buy it up considering how respected she was. But there's also the point that the A-side had never been put into an original album until it was placed as a track for a couple of her BEST compilations in the 21st century. The B-side, "Shoutou Hiko" has yet to be placed anywhere on an album, so basically it is that single that you have to get if you want your own copy of that particular song. And that single apparently costs close to 25,000 yen on Amazon! Nope, it's no "Action Comics" but still...


Anyways onto the main event. "Shiokaze ni Chigirete" may have been the first single in the new era of Matsutoya but the gentle ballad despite that violent title has that folksy Arai feeling (accentuated by that harmonica). Yuming still had more of that velvety flavor and less of the nasal tones in her voice back then which reminded me of those early days of New Music. Her lyrics go into a woman's visit to a favourite beach post-breakup as she struggles with her feelings on the matter. She wonders aloud why she is still wearing those sandals that he used to like so perhaps there is some ember that could be rekindled if the guy hasn't already hooked with someone else.


This is the true rarity here. I was wondering how to translate "Shotou Hiko" when I just decided to pitch the title into the Weblio search engine. It came up with "Lights Out Flight". Good enough, I say. For me, "Shotou Hiko" is a mix of her Arai days with some of that Matsutoya pop she would be bringing in over the next few years through some hints of urban contemporary...I hear a bit of jazz and soul with that piano in there. This song is the breakup in progress as a woman has got her visa ready to head out to a new country and leave her lover in the dust. There doesn't seem to be any regret in her decision. I'd say that the song is the Night to the Day of "Shiokaze ni Chigirete". And according to J-Wiki, the instrumental version of "Shotou Hiko" has regularly been used as the ending themes for radio programs.

"Shiokaze ni Chigirete/Shotou Hiko" went all the way up to No. 31 on the charts. It was a pretty quiet beginning for the newly-married Yumi Matsutoya but of course as we all know more successes came her way not too long after.

Strangely enough, about some days after the release of this single, there was a release Stateside of a movie with some Kurosawa elements about battles in space. It actually did gangbusters. And I only wonder how much a poster labeled "Revenge of the Jedi" would cost these days if the auction fans haven't already bought out the market.
Posted by J-Canuck at 1:02 AM