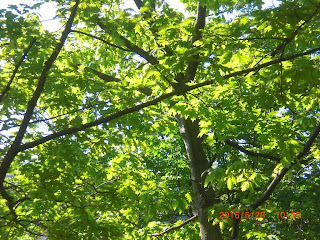 Officially, we're still a few weeks away from autumn. Yep, it is hard to believe that we will soon be approaching the season of changing leaves although the sunsets are becoming noticeably earlier here at least. However, it's also plenty warm in Toronto but knowing the crazy weather patterns in Canada's largest city, that could all change on a dime.


I was doing one of my translations yesterday when I came across one for an area in Gunma Prefecture involving the Usuitoge Pass which boasts that it was the inspiration for the children's song "Momiji" (Autumn Colors). It was composed in 1911 by Teiichi Okano（岡野貞一）and written by Tatsuyuki Takano（高野辰之）, and like another beloved song also by them, it has been sung in all of the schools over the past century. In 2007, it was included as one of the Nihon no Uta Hyakusen（日本の歌百選...Collection of 100 Japanese Songs）which is a selection of classic songs and nursery rhymes. "Momiji" was selected as No. 93 on the list.


I managed to find an English translation for Takano's lyrics at a site called "Mama Lisa's World".  Of course, we gotta have Miku Hatsune（初音ミク）in on the act as well.


One of the great things about autumn in Japan is that not only does it eventually get cooler (very eventually in Tokyo), but it's also a great season for food. Considering the soul-draining nature of the Japanese summer and the fact that the Japanese are humongous foodies, mass media does go on overdrive talking about the latest crop of super-expensive matsutake mushrooms and ayu (sweetfish) grilling away.
Posted by J-Canuck at 7:31 PM