Years ago, when I saw the teaser for Quentin Tarentino's "Kill Bill Vol. 1" (much shorter than the above trailer), I thought it was vintage QT with his promise of a 1970s chop-socky flick. And there was that song...yes, that song. At the time I first heard it, I never imagined it was by a fellow who was part of a couple of 1980s J-Rock bands, Boowy and Complex.


My friends and I caught "Kill Bill" in Japan when it was released in 2003. I think everyone went totally gaga in the States and Canada but when we viewed it, the audience in Tokyo was somewhat more nonplussed and engaged in a mass headscratching session at some of the scenes. I was never sure whether the folks around me were aware of QT's love for the yakuza movie and his tribute to them through "Volume 1". By the way, the lady to the right of O-Ren in the dark suit is played by Julie Dreyfus who was a regular face on Japanese TV as a tarento and panelist. I was surprised to find out from Wikipedia that she is apparently distantly related to "Seinfeld" actress Julia-Louis Dreyfus.

Still for me, the one scene that made QT's movie all the memorable was O-Ren's entrance into The House of Blue Leaves with her lethal entourage (well, lethal until The Bride made mincemeat out of them)...all to the tune of "Battle Without Honor or Humanity" by the walking force-of-nature guitarist Tomoyasu Hotei（布袋寅泰）. Along with the fact that he was the terrifying tower for those two bands I mentioned, I knew him later as the songwriter and later husband for Miki Imai（今井美樹）.


And here I thought that the fellow was getting mellow in his middle age when he came up with the ultimate song for a power walk. Hotei is great with the guitar but then the horns come in and you feel as tall as he is as you're walking down the red carpet, and to me his 187 cm of height isn't anything to sneeze at.


Whatever the case, it is very cool. According to the liner notes for the song, the motif was not to have it bang you over the head immediately but to have it percolate slowly like water coming up to a roiling boil before it starts coming over the sides of the pot. Power walk, nothing....I wanna make a 12-minute egg to this song! 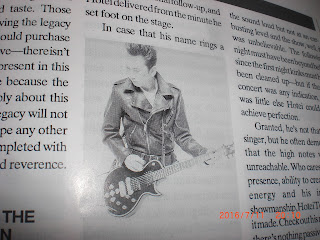