A number of weeks ago at work, I had the chance to meet the founder of Marutama Ramen. To be frank, I have no idea what his name is and simply know him as Oyakata (親方). I found it extremely unnerving to have him seemingly scrutinizing my one-month's-worth-of-experience actions at first - I sort of dreaded having to be the one to serve him a large plate of Katsu Curry. And then he was notified of my love for enka. Turns out Oyakata's a fan of the genre too, with Sayuri Ishikawa (石川さゆり) and Aki Yashiro (八代亜紀) as his favourites - he looked more like a Ikuzo Yoshi (吉幾三) fan, though. With a well-delivered excerpt of "Nagasaki wa Kyo mo Ame datta" by him (because I like Mae-Kiyo), a karaoke invite when I make it to Japan (to study... eventually), and those cool-guy shades (really cool), I got to say that he's a pretty easy-going fellow. That's not to say I won't be on edge when he appears at random again, but maybe a little less than before.

Anyway, oyakata is a title I once thought only referred to the master of a group of ronin. In actual fact, it can mean (according to Jisho.org) chief, master, or supervisor, can be used in multiple contexts, such as being the founder or owner of a restaurant. That brings me to the topic of this article, "Tsuki no Hozenji Yokocho".

For the longest time, I assumed that this Takeo Fujishima (藤島桓夫) hit may have something to do with a warrior from Hozenji Yokocho setting out on a journey of his own, even though the premise sounds a little odd. That's due in part to my former assumption of the meaning of oyakata since it's mentioned a couple of times throughout "Tsuki no Hozenji Yokocho", as well as the music, composed by Keio Iida (飯田景応). The dramatic strings, sharp twang of the electric guitar, and shrill notes from the flute gives the song an overall foreboding and intense atmosphere that I generally associate to a number of ronin enka. However, with the knowledge that oyakata could be used in the latter sense, finding out what a "Houchou" (包丁... Kitchen knife) is, and paying attention to the song's introduction by announcers in videos, I was able to connect the dots. Our main character isn't a masterless samurai, but a chef.


"Tsuki no Hozenji Yokocho" was written by Tetsu Tonimura (十二村哲), and it has Fujishima narrating in his distinctive vocals the story about a young chef keen on honing his skills after taking on an apprenticeship at what may be a renowned restaurant, Fujiyoshi - I think the oyakata mentioned should be that of this joint. In doing so, he has to leave behind his heartbroken lover, Koi-san, until his training is done and when he can set up his own business. Throughout the lyrics, there are some instances of the Kansai dialect, such as when the honorific "-han" is used at times instead of the usual "-san", and "Wate" instead of "Watashi".

The destination of interest here is none other than the often-sung-about Hozenji temple, nestled in the little Osakan alley, and the temple's most notable inhabitant, Mizukake Fudo. This is where Mr. Chef met and fell for the lovely Koi-san whilst beseeching the moss-covered deity for culinary expertise. According to this travel guide, it is believed that the moss-covered deity, made mossy by having water splashed on to it constantly by worshipers, can bring fortune to businesses and everlasting love, the latter most likely being prayed for by the couple to ensure they stay together despite Mr. Chef's commitments.


(I'm sorry but the video has been taken down.)
Looks like Koi-san ain't gonna settle for sukiyaki, Mr. Chef.

"Tsuki no Hozenji Yokocho" was released in 1960, there isn't much information on its success on the J-Wiki but I'm sure it was most definitely a hit, if a performance on the 11th Kohaku and being  a mainstay on current day music shows, especially Osaka specials, are anything to go by. The tune is covered by many, but I've decided to put up Kiyoshi Hikawa's (氷川きよし) rendition from on a Shin Nippon no Uta episode. Mr. Chef and Koi-san's love story is brought to life by Hiroshi Miyama (三山ひろし) and Midori Oka (丘みどり) respectively, with Hikawa in the narrator's role. While done for the sake of comedy, I find how Miyama fumbles at his lines an accurate representation of me when I tried it for myself - the satisfaction of finally uttering the whole sh-bang within the given time frame without stumbling also included. Makes me wonder if Fujishima ever got tongue-tied at the spoken parts. 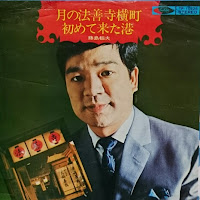