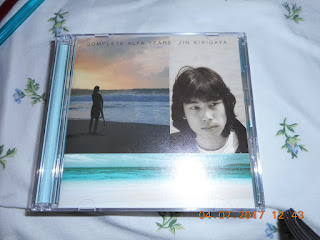 A few days ago I mentioned about that 3-month odyssey my CD Japan package took to get to my home. Well, one of those discs happens to be pictured above, "Complete Alfa Years - Jin Kirigaya"（桐ヶ谷仁）. It's not a BEST compilation but a merging of Kirigaya's first two albums "My Love For You" (1979) and "Windy" (1981).

After listening to his "Wind Surfing" which incidentally was the launching track on "Windy" and reading about him in "Japanese City Pop", I figured it was time to pull the trigger and hear more of his stuff.


Well, now that I got the double-CD, I gave it a listen over the past couple of days and again, I'm happy to say it is a keeper. The interesting thing is that his 2nd album was most definitely focused on J-AOR and City Pop whereas "My Love For You" was a bit more diffuse in genre. It was more on the general pop and New Music side maybe even with a tinge of folk in some of the tracks.

One song that especially caught my eye and ears is "Yotsuya Yuumagure" (Evening Twilight at Yotsuya), which was written and composed by Kirigaya and was placed in "My Love For You".  A particularly sad ballad, it also seems to hide a lot of shock and rage on the part of the guy who may have been dumped rather suddenly. Through the lyrics, he is lashing out at the woman by telling her to get away and never come back. The concealment is quite good since the singer delivers the song very softly. In fact, I think he sounds like another J-AOR/City Pop crooner. Despite the anger, "Yotsuya Yuumagure" sounds like a rather introspective tune to be heard at a cafe during a rainstorm.


The setting for the song is the small Tokyo district of Yotsuya which is a bit east of Shinjuku. It's notable for the fact that Sophia University is located there and Yotsuya Station was where I got off every Monday to walk to the Hotel New Otani to teach a couple of the more wealthier students I had. In fact, the path that those students above in the video are walking is the same route I took. However, instead of the straight route they take when they cross the street, I turned right at the intersection and kept on going until it curved gently to the left and the hotel was across the street. That particular path is spectacular during the spring since it is lined with a lot of cherry trees coming into bloom.

I've also heard that singer Lisa Ono's（小野リサ）family has a restaurant in the area, too. Unfortunately I never caught a chance to check it out but I've heard that the singer herself makes unannounced appearances there to perform.
Posted by J-Canuck at 10:32 PM