I feel like I haven't done a pun/play on words in my articles for a while, so I'm making up for it by... putting it in this article's title! It's "Enka" plus "Encouragement" to give you "Enka-ragement"... *Jazz hands* 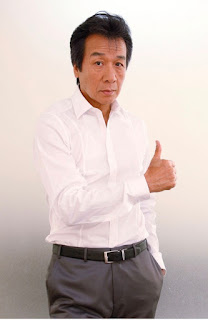 OK, nonsense aside, a common question I'm being posed with whenever I were to tell people I like enka is, "Why?!" This inquiry is as simple as it gets but it tends to have me stumped and unable to give a proper answer besides, "I don't know", as I never really gave it much thought. Lately though, I have been raking the inner depths of my mind to figure out why I strangely enjoy this genre of music after being told that there is definitely a reason for it. I mean, definitely more to just seeing geriatrics warble tunes far older than me in a (sometimes) strange manner, right? Well, at this point I have come up with a couple of answers:

1. Enka is usually depressing in terms of its story line. It often has the character in question drinking his or her liver to death and sounding like they're gonna start rolling on the ground in figurative agony (maybe physical agony too?). While I cannot readily associate to such situations, I feel like I can somewhat relate to the angst being delivered when I hit rough patches. Lines like "Watashi baka yo ne, obaka-san yo ne" (from "Kokoro Nokori") and "Iya desu ne, baka desu ne" (from "Miren Gokoro") do sound amusing, but can be quite relevant at times...

2. The genre can also have its lighter side. I've come to realise that there are tunes that have the protagonist persevering through tough times or striving to achieve their dreams - the road may be bumpy, but there's always that light at the end of the tunnel. Then there are also the melodies that get me pumped up. Such enka do give me that extra nudge I need when I face some uncertainties - feels better than wallowing in a pit of despair.

With that being said, and as my title and short prologue have implied, I have decided to a list on the enka I rely on for a little encouragement. So far, five songs have been picked out of many such "Enka-ragement" songs I listen to and they aren't listed in a particular order. Judging from a few of my previous articles, I think you may be able to guess what one of them would be.

To begin, here is Tendo's hit featuring that feisty Osakan spirit. What I enjoy about it is that it starts off as your typical self-loathing enka, but soon the character determines to not let the incident overcome her.  The unwillingness to give up despite hitting a wall is highlighted when Tendo growls out "Maketara akan" with gusto. One's got to move on with life eventually and no use wallowing in despair. Oh, and I just learnt that the title of the song is "Tonbori Ninjo" rather than "Dotonbori Ninjo" as I had initially thought.

Gritty, sea-faring enka are usually quite apt for encouragement. They mostly focus on the trials of working on the high sea and having to bite the bullet to bring a substantial haul back to shore. What made me choose Hikawa's boisterous "Genkai Funauta" out of the others I know is the line "Naku na makeru na yowane wo hakuna" which, if I'm not wrong, means something on the line of "Don't cry, don't lose, don't complain". Definitely an effective line to slap me back into my senses when I'm beginning to retreat back into my shell when doing work.

Well, this entry and the next one on this list are more of a combination of both my reasons for liking enka rather than just one of them. Yoshi's "Kadode" is pretty bleak as our main guy finds his life a drag due to the struggles he faces, but he steels himself to rise above them. This one's similar to "Tonbori Ninjo", but I tend to pick "Kadode" more often due to the stronger melody. I am still unable to find Yoshi's version so I've put up Kouhei Fukuda's take on it instead, however, I prefer Yoshi's gravelly and intense delivery that feels more... real... for want of a better word. Plus the "Yoisho!!" that's roared in the original is quite the morale booster.

Just the title, "Nigate Nandayo" (It's Tough/Difficult), was enough to have me going back to it when I'm not having the best of days. No, it's not because I'm feeling homesick like the guy Hachi sings about. It's because of its consolatory aspect towards the end of the song. The customers of a bar assure the weeping protagonist, a singer, that it's alright for him to get emotional as they too feel the same way. I guess it makes me feel better that there are people on the same boat as I am, and that there's nothing wrong in feeling down from time to time.

Pretty sure you saw this one coming - it's my ultimate o-enka (応援歌). "Osho" is about one oozing with confidence over his shogi skills and Muchi's image while performing reflects this. Combined with the regal melody that makes one feel like they can conquer anything (perhaps just me?), "Osho" instills a decent amount of courage and fighting spirit in me when I need it.


Well, that's the end of this list. I may consider doing a list of enka that focus more on my first reason for liking the genre sometime, but it's not a concrete idea as of yet. If you'd like to, do share any songs you listen to for some encouragement.