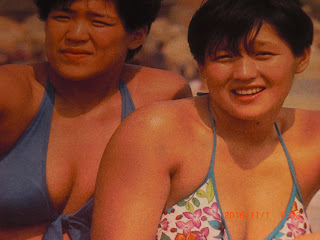 There was a time in the late 1970s into the early 1980s (yup, when I was first getting into pop music in general) when my brother and I were into watching wrestling on TV on Saturday afternoons. Folks like The Iron Sheik, Rowdy Roddy Piper and Sgt. Slaughter were regular over-the-top figures who came into our home on a regular basis. And with "Hockey Night in Canada" on CBC later that night, Saturdays were pretty darn sports-heavy in my household.


Now I did know that the sports scene in Japan was also quite active with baseball and sumo, but I hadn't known that wrestling was big there, too. I also learned later that this included women's wrestling. Somehow, through one of those rental tapes from Nippon Video all those years ago, I also discovered that a number of these female wrestlers entered the aidoru field and even sang in front of their rapturous audience after a well-fought battle in the ring. Only in Japan!

The only female wrestlers that I can remember are Dump Matsumoto (ダンプ松本) and the Crush Gals (クラッシュギャルズ). It was the latter tag team that I recall doing all that singing. I never found out what they were singing but I think it was probably their debut single "Honoo no Seisho" (Bible of Passion).

The Crush Gals were Chigusa Nagayo（長与千種）from Nagasaki Prefecture and Lioness Asuka (ライオネス飛鳥) from Tokyo, The two of them had already been wrestling for a few years when Nagayo was thinking about packing it in due to some friction with the other wrestlers and other reasons but decided that if she were going to retire, she might as well do it with some fun. So in 1984, she was paired up with Asuka, who was going some similar turmoil, and the Crush Gals were born as aidoru wrestlers. As such, "Honoo no Seisho" was released in August 1984.

Listening to "Honoo no Seisho", I just went "not too bad at all". Written by Yukinojo Mori（森雪之丞）and composed by Tsugutoshi Goto（後藤次利）, the song comes off as a pretty smooth tune that wouldn't sound out of place as a theme song for a dynamic anime. It's even got a nice sheen with those strings in there. Plus, Nagayo and Asuka can hold their own behind the mike.


The Crush Gals became the darlings of pop culture at the time and while smacking heads in the ring, they were able to release 7 more singles and 7 albums.