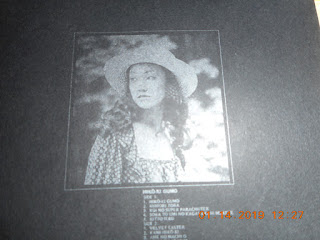 I didn't think that I would be putting up an article about such a recent single by Yumi Matsutoya（松任谷由実）since my greatest interest in her music really only goes up to the early 1990s. However, I was given a heads-up from her YouTube channel earlier today that her latest digital download single (her 8th) is due for sale tomorrow (September 18th) although the date has already arrived in Japan.


"Shinkai no Machi" (Deep Sea City) has been described in the comments under her YouTube video as "...the latest 2019 Neo City Pop number by Yuming". And apparently, the song was an amalgamation of an idea that had popped up in her head of a resort of the mind while visiting Berlin the previous year and a fusion/AOR approach. From that, I started thinking of urban contemporary "Inception".

In any case, I did sense that newer version of City Pop (can hear that wacka-wacka guitar and that crystalline synth) that has been appearing since the 2000s but also hints of her work from the late 1980s and early 1990s. The overall effect is a dreamy utopian cityscape at night and I guess that must have been the same idea for the producers of the music video with Tokyo in a starring role while hints of its future pop up. And I think that there were also hints of the past as well through the various kinds of animation that appear. Plenty of "Inception"-like images additionally crop up including the dapper mystery woman that Yuming herself portrays who seems to tower over an uncertain heroine who I can't be sure is either a young girl or a young woman. Then, of course, there is that feminine figure flying in the night sky: is she the older version of the heroine or is she an angel looking out for the heroine? Moreover, what is the significance of that apple that the heroine finally bites into? Is there some some of religious element in there? Mysteries aside, I've always liked the idea of a metropolis with a style that brings in elements of the past and the future, and that's what the video seems to bring.

Yuming's newest release isn't an instant earworm. Her high tones have tended to quaver a little too much in recent years so I'm glad that those have been largely restricted to the beginning of "Shinkai no Machi". Also the song is mellow enough that there isn't any immediate hook that has grabbed onto me. Still, I think it's one of those numbers that will eventually wend itself into my happy place as the singer's contribution to the latest in Japanese urban contemporary.
Posted by J-Canuck at 3:52 PM