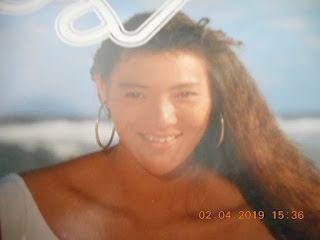 Fall supposedly came at around 5:30 this morning. Folks can be forgiven if they thought of that announcement as fake news, because it's feeling pretty summery hot and humid out there right now. In fact, I've got the fan going on as I type, but it is a meteorologically changeable time and it is Toronto, so I gather that I can't really be that surprised by today's developments. Plus, things will cool down later in the week.


To commemorate the official arrival of autumn and the lingering feeling of the hot season, let me bring in Anri（杏里）for the first KKP blog entry of the week through her "Banka no Koibito tachi e" (To The Late Summer Lovers). This is a track from her 1990 14th album "Mind Cruisin'" from which I've already spoken about the title track.

Created by that solid triumvirate of Anri, lyricist Yumi Yoshimoto（吉元由美）and arranger Yasuharu Ogura（小倉泰治）, "Banka no Koibito-tachi e" is that perfect romantic ballad for that transitional time going from summer to autumn. It would absolutely match that couple's sunset walk along the beach or even that relaxing view from the lanai. Just sit back and cool down.
Posted by J-Canuck at 1:40 PM