Higurashi -- Kaze no Oto wo Kikitai（風の音を聞きたい） 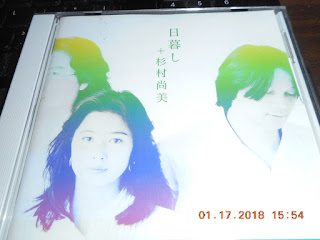 This isn't one of those high-energy City Pop tunes of the 1970s accompanying the grab of a coffee and a danish while rushing to work.


For those who know the 1970s folk band, Higurashi（日暮し）, this is a song that is right up their tree-lined alley. "Kaze no Oto wo Kikitai" (I Want to Hear the Sound of the Wind). A track on their third album "Machikaze Kisetsu"（街風季節...Town Wind Season）released in November 1974, "Kaze no Oto wo Kikitai" is definitely more for sitting down in a quiet cafe and sipping the coffee slowly while contemplating what has come before and what will happen.

Written and composed by Higurashi guitarist Seiichi Takeda（武田清一）, the song centers around someone who seems to be going through some doldrums while living in the big city and is searching for some solace from the wind blowing outside. The music is calming enough with main vocalist Naomi Sugimura's（杉村尚美）cottony-soft voice but when the whole band joins in the chorus, the atmosphere gets downright hypnotic for me. It's a folk tune but there are elements in there (keyboards for example) that further make me feel that the setting is somewhere in the metropolis rather than out in the countryside. In a number of ways, "Kaze no Oto wo Kikitai" reminds me of the very first Higurashi song that I had ever heard, "Aki no Tobira" （秋の扉）.

A couple of things of the nomenclature involved here. As I also mentioned in the second Higurashi article for "Inishie"（い・に・し・え）all the way back in 2013, I was never quite sure about how to read Takeda's first name since the kanji has a number of readings but for now, that's what I'm going with unless someone corrects me. Also, the first pair of kanji for the title for that third album has been romanized as machikaze for one entry after a Google search of the album, but according to Jisho.org, 「街風」is also the proper family name Tsumuji. However, not quite seeing the significance of "The Season of Tsumuji" and with none in the band with that name, I think I can stand my ground with "Machikaze Kisetsu".
Posted by J-Canuck at 1:38 PM