Hello, it's been quite a while, hasn't it? How has summer (or winter, depending on your hemisphere) been? I somewhat managed to dodge most of the worst of Japan's monstrous summer by escaping to Singapore for a couple of weeks last month, but I did get a taste of it prior. I never thought I'd say this, but I don't think I'll ever complain about the heat and humidity in my home country for a while.

Anyway, I have survived my first term in university and have just begun the second last Monday. Perhaps it's a combination of post-holiday blues and the foreboding amount of assignments, but I feel like I've fallen down the stairs. Face first. Well, in spite of the rough time readjusting, one thing was able to clear that storm on Saturday: My very first karaoke recital. 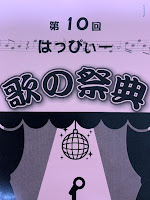 To give some background information on whatever I know, karaoke recitals that feature enka seem to be quite a major thing in Japan, particularly amongst the elderly, as you can probably tell by the genre. There are those on a larger scale that are professionally organized and host moderately to really popular enka stars and renowned songwriters. These would probably include the competitive category as well, where the acts are judged and scored, and there will be winners. Then there are those small scale ones held in little towns here and there, often organized by a local karaoke joint. Usually, these ones are just simply for the folks to have some fun, and everyone goes home a winner. The one I participated in was the latter, simply because it was my karaoke haunt that held it, and Shiro Jiisan strongly encouraged me to take part three months prior. I had doubts about my ability, but when the senior you thought was calm yells at you excitedly to join in, you know you have to. 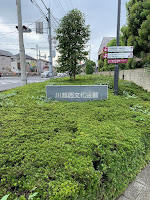 The recital was the 10th installment of the annual "Happi Uta no Saiten", "Happi" being the name of the karaoke joint, and was held at the nearby Nishi-Kawagoe Bunka Kaikan. The event hall wasn't as big as I had feared, though the idea of having about a third of it it filled, in other words way more than what I'm used to, was rather intimidating, especially when they were all going to be looking at me. The regulars I had gotten to know, all veterans at this, most even in charge of the event itself, reassured that it'd be fine. Sure. And they were fussing over what I should wear for my time in the spotlight, which brings me to my next point. 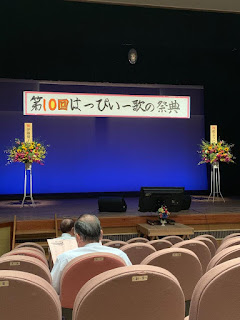 Seems like no matter the scale, participants would still go all out in the way of dressing, contrary to what I had believed. The women would be in loud, frilly or sequin-embellished gowns, or in kimonos, and be decked out in full makeup and possibly wigs. The men would be in flashy suits or kimonos as well. The effort put in truly astounds me. It made my "costumes", comprising of shirts and black jeans, pale in comparison. I did firmly turn down an offer for one of the aforementioned types of dresses. I may have ventured deep into the world of enka, but I have my reservations when it comes to its... fashion sense.

Finally coming down to my song choice. I was due to sing three songs, which was actually one more than the usual - I'll get to that in a bit. There were some changes here and there from the time I began my deliberating in June, but here are my final picks.

The advice I received were: choose something that would knock the audience's socks off, and something jolly. Thinking of the former, I was very close to choosing Hachiro Kasuga's (春日八郎) "Akai Lamp no Shuressha" (赤いランプの終列車), but consultation with my mom led me to Haruo Oka's (岡晴夫)"Akogare no Hawaii Koro" instead. I agreed with her rationale of it being relatively simple while still being able to stun the crowd, but what made me seal the deal was the sentimental value. Considering it was the very first ryukoka I had laid my ears upon nearly a decade ago, I felt that it deserved to be the first tune I sing at my very first karaoke recital.

To get into the Hawaiian spirit, I wore a red Hawaiian shirt over a white T-shirt and had the straw hat Mom wore during her university days upon my head. I jellied when singing, but it turned out OK - better than the rehearsal, at least. I think.

A Kiyoshi Hikawa (氷川きよし) song wasn't on my mind at all in my decision-making. Considering my age, it would be of no surprise should I choose one of his works. However, the folks advised me to change my initial Mood Kayo selection to something more exciting. To what, I did not know, until I tried out Hikawa's "Tora" one day. That was when they unanimously agreed that "Tora" should replace "Shianbashi Blues" (思案橋ブルース). I didn't mind as it felt manageable, and, in hindsight, the words were exactly why I should do it. Besides it being somewhat gender neutral, the proclamation of being the young white tiger before the aged was most fitting. Plus, standing up to adversity without complaint is something particularly resonant in me for this school term.

My outfit here was a white collarless shirt over grey and white striped T-shirt. I think it was the powerful score and the context, but the confidence it lent me (albeit temporarily) made strutting back on to the stage and staring down the growing crowd feel absolutely incredible. "Sing loud and proud. You're the tiger, after all," were my old pal's words. I tried, but I still couldn't help jellying up a bit, and for some reason, particularly during the most critical part of self-declaration. It felt awesome nonetheless.

This number by Hisao Ito (伊藤久男) and Akiko Futaba (二葉あき子) was the first actual duet I sang with a male counterpart. And what began as an impromptu duet between me and Shiro Jiisan became quite the attraction at Happi. It then caught the attention of an under-the-radar enka singer Yoko Ai (藍ようこ), who was to be the recital's guest star, when she came a visiting a month-ish prior to the event. I presume it was mostly due to her ravings that the mama-san and Shiro-san eventually decided that the duet should be included despite the both of us already meeting the two song quota. Seemed like word traveled down the Kasumigaseki-Matoba grapevine real quick, because gramps was happily telling me that one of the highly anticipated acts was, well, us. I suppose many were curious to see the grandpa-grandkid-like duo sing an ancient and obscure tune. Great for my ego, not great for my anxiety.

Because Shiro-san was to wear a yukata, I had to too. I'd never worn one before, so the mama-san, who'd so kindly picked one out for me, helped me put it on. I don't know how people wear these things! The belt was an absolute killer; one can hardly breathe or bend over. I liked the purple on black colour scheme though. Anyway, appearing alongside my Brojiisan (yep, my pun idiocy has reached new lows) allowed for a great deal of fear to be expunged. I guess that's why I was able to pull it off better than the other two in spite of worrying for it the most.

Overall, I had a great time taking part in this recital. It wouldn't be far-fetched to say that I've always wanted to take part in something like this, but I didn't think it would be feasible. It started as fantasy, but then enka came into the picture and fantasy morphed into fun romps at karaoke bars, and now, well, here I am. Hmm, how things snowballed down this path fascinates me. I wonder what comes next. 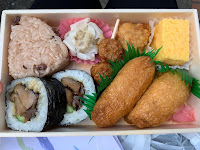 P.S. While I received wonderful encouragement from the familiar regulars, Shiro Jiisan, or should I say, Mr Yamagishi, really went above and beyond. Even though he too had lots of event duties that had him constantly going around and about, he always made sure to show up by my side just before I hit the stage and watch from the sidelines till I was done.

Imagine Ichiro Toba (鳥羽一郎) singing this, and you got Mr Yamagishi.

As per tradition, Jiisan served as the Top Batter for the recital's two segments. He did Oka's "Seishun Paradise" (青春のパラダイス) to kick start the show, then followed up with Akira Fuse's (布施明) rendition of "My Way". He often wears the direst expression when singing (anything), but when he noticed me grinning at him stupidly from the second row of seats in this second segment, I could've sworn that for a split second, that scowl ever so slightly turned upside down. 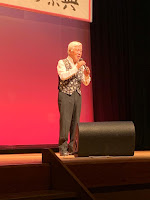 In the course of the five-ish months (in counting) I've known him for, he slowly went from your typical stony showa era fellow to affectionate marshmallow. I think it's because, aside from music, I've been bothering him with random stuff like my test scores from Japanese class and bromide collection. He does reciprocate in ways such as attempting to understand smartphone technology, and trying to further expand his one trip's worth of knowledge on Singapore.

He is indeed not my actual grandfather, but he's the closest to one I've ever had and always yearned for in a very long time.

You shouldn't look at your list. Go with a song that represents how you feel here and now, that way you'll be able to sing it well and with all your heart.
Posted by Noelle Tham at 12:31 AM