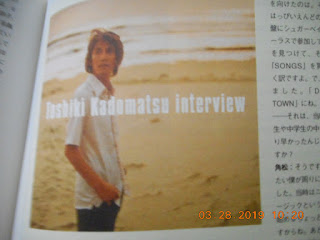 Once again, Jerry from Come Along Radio let me know about the wonders of Toshiki Kadomatsu（角松敏生）. This time, the recommendation came for the musician's especially vivacious brand of 80s City Pop through his 5th album "Gold Digger ~ with true love ~" from May 1985.


Well, I gotta say about that album cover...Kadomatsu does look rather dapper even while on the can there, but I have to confess that whoever the architect was for that building must have been inhaling something quite powdery or he's an extreme exhibitionist. At the very least, he could have endeavored to hang up a courtesy curtain above that left counter (good heavens, there's a woman serving drinks nearby!) with a convenient air freshener.

Anyways, enough about interior design. Jerry played the first track "I Can't Stop the Night" which was fine, but I have to say that I had my eyes and ears on the second song, "Springin' Night". I'm just a sucker for Kadomatsu and a tight horn section. Nice and bouncy, this would make for a springing musical accompaniment to a night out in Tokyo. Along with my effusive compliments to his words and music, my kudos also go to trumpeter Shin Kazuhara（数原晋）for the brass arrangement which also has Jake H. Concepcion on sax and Yasuo Hirauchi on trombone. Meanwhile, pianist Soichi Noriki（野力奏一）is on the synthesizer bass, and one of the backup chorus is Yurie Kokubu（国分友里恵）.