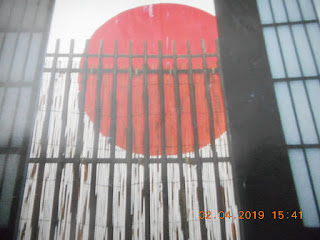 I don't quite remember when I started enjoying enka and Mood Kayo. I mean, it's been something that I have been listening to for my entire life when my parents played the old LPs on the stereo but I always considered that brand of kayo kyoku the stuff that my parents liked and I just had to hear it. Pretty sure that it wasn't during that 1981 trip to Japan or even exposure to "Sounds of Japan" on the radio since enka tunes were the main songs on most of the broadcasts (which I didn't listen to) while the pop stuff that I fell for (which I did) made their presence known perhaps once a month. Still, listening to Takashi Hosokawa's（細川たかし）"Kita Sakaba"（北酒場）on "Sounds of Japan" opened the door a bit for me.

Most likely, it started to a small extent during my 1981-1991 JET Programme stint when karaoke almost became a job-related obligation and then things started further expanding during my far longer stint between 1994 and 2011. Of course, watching "Uta Kon"（うたコン）and its predecessor "Kayo Concert"（歌謡コンサート）on NHK and doing this blog over this decade has further strengthened my amity toward these older genres. The music for enka and Mood Kayo with its noble koto, violins and Latin brass among other instruments has also proven to be a tonic of sorts whenever I feel that I've gotten a little too much of the J-Pop stuff, even my favourite genre of City Pop. Maybe the bouncy bass has its limits within me.


In any case, I was watching a recent episode of "Uta Kon" when enka veteran Fuyumi Sakamoto（坂本冬美）appeared near the end to perform her 48th and latest single, "Ore de Ii no ka" (Will I Do?) which just came out late last month in August. For some reason, I was struck by this one although I have heard my fair share of enka on this show and elsewhere.

My father remarked during the performance that this was a refreshing change since I believe that Sakamoto had perhaps gone for a more modern enka approach in recent years with a truly rock guitar and arrangement. And I think that's what struck me positively about "Ore de Ii no ka" which is a story of a lifelong love between two soulmates, represented by Ou Yoshida's（吉田旺）lyrics. Koji Tokuhisa's（徳久広司）music with Toshiaki Maeda's（前田俊明）arrangement doesn't seem to have that contemporary enka feeling to it; there is something more old-fashioned as if "Ore de Ii no ka" had been composed back in the 20th century. The song peaked at No. 36 on Oricon.