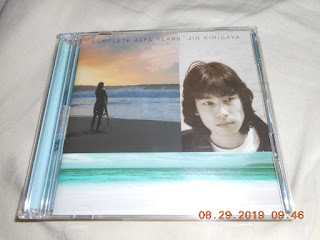 Happy Monday! I've been in touch with some of my friends in Japan and although Typhoon Faxai has wreaked a good amount of destruction in the Kanto, luckily, none of them have been unduly affected.

Considering the name of the album here, this has no connotation with the typhoon but I have wanted to feature Jin Kirigaya's（桐ヶ谷仁）1981 2nd album, "Windy" for some time so I'm taking the opportunity today. Actually, I was able to get it as a 2-for-1 deal through a 2005 release of the singer-songwriter's "Complete Alfa Years" which brings together "Windy" and his first album "My Love For You" from 1979.


Kirigaya was responsible for all of the music while he split lyric-writing duties with Michio Yamagami（山上路夫）. Based on what I heard from the first track on "Windy", "Wind Surfing", I made my choice to grab "Complete Alfa Years" since at the time, the individual albums were too difficult or pricey to get. As well, Masaki Matsubara（松原正樹）and Masataka Matsutoya（松任谷正隆）also had their hands full here with the arrangement.

Let me start off with "Natsu ga Sugite"（夏がすぎて...Summer Passes）which is along the lines of an Off-Course（オフコース）ballad in terms of mood and sound. Perhaps there is an even deeper richness with the arrangement as if the story were taking place in Europe with the music reflecting the happy and sad times of one person's romantic recollections. Kirigaya's vocals even remind me of those of Off-Course's Yasuhiro Suzuki（鈴木康博）. "Natsu ga Sugite" was also Kirigaya's 4th single from July 1981.


That same sort of Off-Course feeling imbues "Tooi Hi no Tokimeki"（遠い日のときめき...Heartbeats for Distant Days）, his 3rd single from March 1981, another languid ballad with sad piano and shimmering strings that kaz-shin at blog "Music Avenue" has described as being rather kayo-esque. What especially clicks with me is the second delivery of the refrain which takes on a certain subtle layering effect.


"Saraba Ai no Hibi"（さらば愛の日々...Farewell to Days of Love）is a Yamagami and Kirigaya collaboration with that overseas Steely Dan sense of adventure, thanks to Matsubara handling the rhythm while Matsutoya took on the strings.The effect is that I can easily hear "Saraba" as both a City Pop tune as well as a Resort Pop song somewhere away from the metropolis. In fact, I immediately thought of Akira Terao's（寺尾聡）"Reflections" the first time I heard it. Nice sax solo by Jake H. Concepcion, as well.


The only other track from "Windy" that I could find via YouTube was "Hitori dake no Waltz"（ひとりだけのワルツ...Waltz for Only One）which once again had Yamagami providing lyrics, a song with that lilting waltz melody punctuated by some lay-it-on-the-line percussion and guitar as if there were storms on the horizon for this romance. Again, there is something rather metropolitan about this song but perhaps somewhere beyond Japanese shores.

Initially assuming that "Windy" would keep itself to a City Pop/AOR environment, I was surprised (and delighted) to hear that Kirigaya was more than happy to go further afield for his melodies. The album has been described as pop but it's not the type of pop that I would often see on the Oricon charts or on the TV music ranking shows. It definitely sounds more like an adult contemporary creation with the recommendation of a capital A for the adult and a couple of cocktails at the hotel-top lounge. Will be looking forward to writing about "My Love For You" later on.
Posted by J-Canuck at 3:47 PM