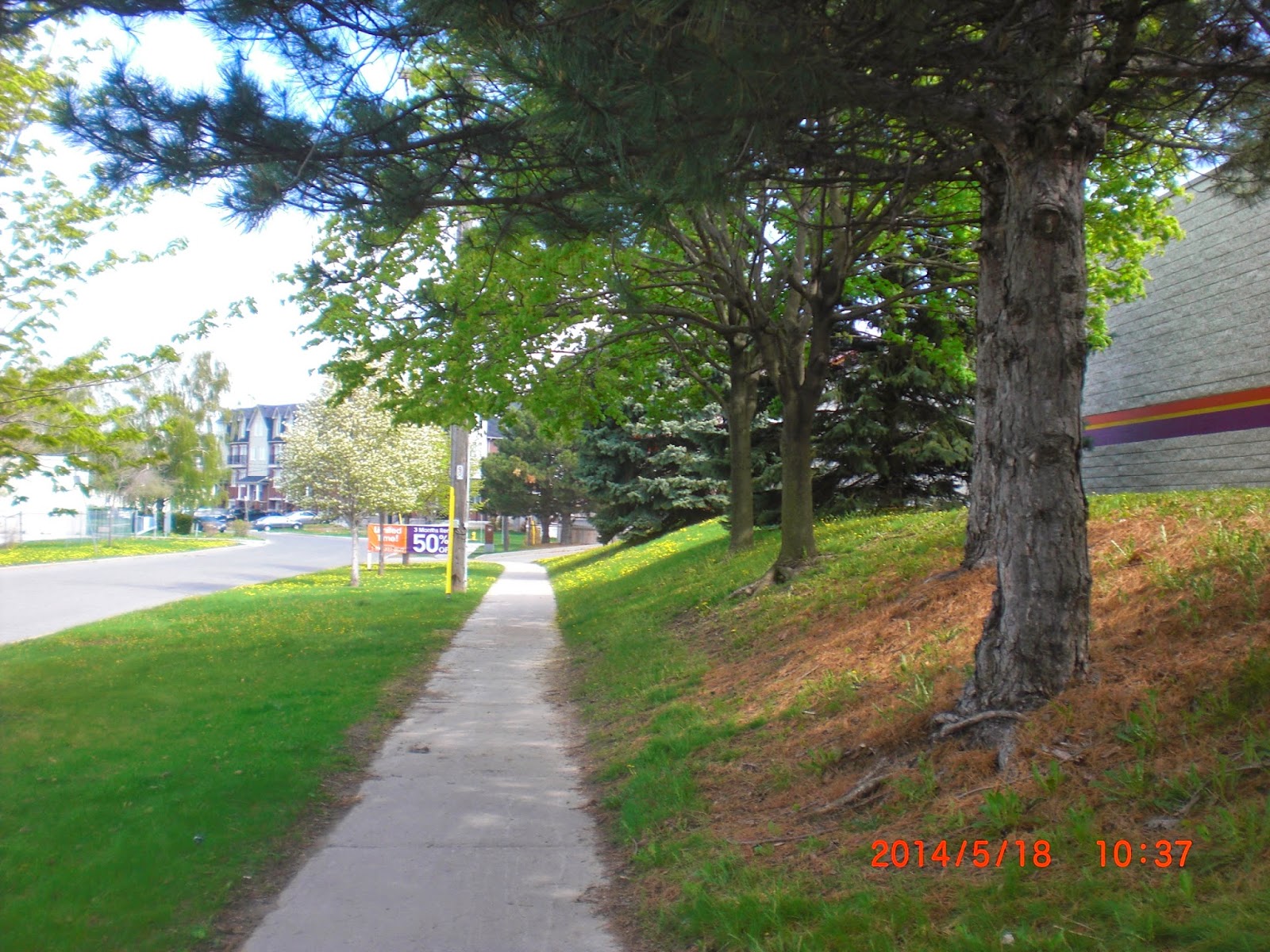 Well, it's been a little over 6 months since I wrote up my 80s Playlist. That whole thing went up on New Year's Eve 2013, just a week after one of the worst ice storms in Toronto's history literally brought a good chunk of my hometown to a halt for several days. I put up a picture of my wintry neighbourhood on that playlist, so I decided to put up something considerably greener and warmer for this one, my 70s Playlist.

Now, my criterion here for my choices between 1970 and 1979 inclusive is exactly the same as was the case for the 80s Playlist. These are songs that I've always liked to listen to and they happened to be the ones that always popped up in my head the most when it came to that decade. Once again, it was one of those things where I feverishly jotted singers and titles down on a piece of paper and then I had to start cutting here and there. And so, simply for the sake of time, space and that other dimension which we humans all share, laziness, the list will have 11 entries. Yes....11. There was that one song and singer that I had to include, partially out of guilt since I ended up not putting in any of her work in the 80s Playlist.

Therefore, let's all dive in...


1. Hiroshi Itsuki -- Yokohama Tasogare (1971): I have to make some recompense here since I didn't really give this song its due in terms of information when I wrote quite briefly about it a couple of years ago. Itsuki's first big hit was written by Yoko Yamaguchi （山口洋子）and Masaaki Hirao （平尾昌晃）for release in March 1971. The singer's career had been on a precipice when Itsuki took a chance on this one after 6 years of no hits and, like all fairy tales, the happy ending (and beginning) came true. It hit No. 1 and was the 6th-ranked single of the year, getting a prize at the Japan Record Awards and an invitation to the Kohaku Utagassen.
For me, "Yokohama Tasogare" was the first enka song that I had actually listened to (instead of merely hearing it) after getting fully interested in kayo kyoku in 1981. In fact, I used to listen to just the karaoke music and enjoyed it. It's one of those songs that straddles the line nicely between enka and Mood Kayo.


2. Mari Amachi -- Hitori Janaino (1972): I already made mention of this song and an unfortunate incident in a taxi riding away from Haneda Airport in the original article, so you can take a look there. But let it be said that compared to the later glamourous aidoru of Momoe Yamaguchi and Pink Lady, Amachi will always be the girl-next-door to me....although she would later appear in some racy V-Cinema type videos about a decade later. And "Hitori Janaino" will always be the quintessential early 70s aidoru song reminding me of my very first time in Japan.


3. Isao Sasaki -- Uchusenkan Yamato (1974): Dang nab it! I listen to this song 40 years later and I still get goosebumps and a lump in my throat. And so, that's why it just had to be on the list. The mighty theme for the mighty Yamato alone had a bunch of us kids running home from school at 3:10 just so that we could watch it at 3:30 under its Americanized title of "Star Blazers". It had and still has the same effect that any episode with the firing of the Wave Motion Gun! Yeah, I'm geeking out here....sorry....


4. Hiromi Ohta -- Momen no Handkerchief (1975): This was another song that immediately came to mind when I thought about doing the 70s Playlist. "Momen no Handkerchief" proudly declares sunny summer weather (although it was released around Xmas). No need to worry about work or study...just get out and enjoy the day with friends. But considering the brutal heat and humidity of Tokyo, that cotton handkerchief will be a must.


5. Hiromi Iwasaki -- Romance (1975): Although I've put down "Romance" as the No. 5 entry here, the early Iwasaki hit was my 11th choice. Reviewing the 10 that I had put down as my 80s Playlist, I realized far too late that Iwasaki wasn't represented at all there, so feeling like a downright heel, I just had to include her on the 70s Playlist. And why not? She may have been an aidoru performing it, but that amazing voice had already been there.

6. Yumi Arai -- Sazanami (1976): I also had a need to put down this song by The Queen of New Music. There have been many earlier examples of the Yuming-dubbed genre, but "Sazanami" possesses that refreshing breeze of bombing down the highway in a convertible from the big city down to the beach. And the tune fulfills the one City Pop condition of sounding like a journey outside of Japan to places unknown and exciting.


7. Pink Lady -- UFO (1977): I can still head back to Japan, mention this Pink Lady hit to anyone from junior high school age and up, and be guaranteed that a handful of those folks will respond by doing the first few moves from Mie and Kei's choreography. And then I can probably entice them to do a few more moves from some of their other songs. However, "UFO" is the one song that arguably represents the ladies at their absolute peak. With those outfits and the crazed dancing, Pink Lady added a goodly amount of dynamism into the aidoru genre. Perhaps Morning Musume and AKB 48 may still be obliged to send Christmas and New Year's cards to the duo every year.

8. Off-Course -- Aki no Kehai (1977): One of the earliest songs that I discovered on "Sounds of Japan" that I really fell in love with. As I mentioned in the article for "Aki no Kehai", this is the equivalent of sitting down on a park bench in late September and simply enjoy the surroundings. Kazumasa Oda （小田和正）did do a cover version many years later as a solo artist, but nothing beats the Off-Course original with the lead vocals and the strings. Because of the beauty of this classic, I had wondered about why Oda had chosen the odd name of Off-Course for the band.

9. Junko Yagami -- Mizuiro no Ame (1978): This was another "Sounds of Japan" hit in my book. The Latin beat in "Mizuiro no Ame" and Yagami's soaring vocals were two of the many reasons that I continued to stick with her and Japanese popular music in general. There was nothing like this in Western music when I also started getting into the US/UK pop scene at around the same time, and it illustrated to me over time that Japanese singers were more than willing to dabble in a number of genres like bossa nova, jazz and AOR. To finish up, there has been a Pavlovian response imprinted in me from this contribution by Junko. When I was listening to the recording of "Mizuiro no Ame", I was simultaneously watching tennis players go at it at Wimbledon. So, now whenever the annual tournament gets mentioned or broadcast on the telly, guess which song pops in my head?


10. Momoe Yamaguchi -- Ii Hi Tabidachi (1978): This still stands as one of my favourite Momoe songs, and it's ironic since by the late 70s, the singer had already been singing in a tougher, more cynical style. But "Ii Hi Tabidachi" had Yamaguchi in a more vulnerable state as she sang about taking that lonely trip after a relationship going sour. That trumpet at the intro and in between verses was one of the wonderful things about it. If the singer ever decided to return to the limelight, even for a one-off performance, I hope it will be to sing this ballad.


11. Yellow Magic Orchestra -- Technopolis (1979): Well, I made one screw-up when I stated in the 80s Playlist that I couldn't put up any of my favourite YMO songs because they were all in the late 70s. There was "Rydeen" which was a 1980 single, so yes, I will be more than happy to take that Moog III-C upside my head, Professor. In any case, I'm happy to say that another one of my favourites, "Technopolis" was released as the technopop band's debut single in October 1979 and managed to get as high as No. 9 on Oricon. The YMO hit has been such an earworm for so many years that whenever I see some sort of futuristic building in Tokyo, out it comes into my head. I wouldn't put it past any broadcaster that it will play the song on a future documentary about Japan's capital as the 2020 Olympics draw near.

Well, there you have it....from enka to technopop. Quite the list. As usual, there were so many others that I had wanted to put up but that's the way it goes. Maybe by New Year's Eve this year, I'll get started on the 90s Playlist. In the meantime, perhaps you readers can let me know some of your favourites here or at any of the other lists in the "Author's Picks" category on the side.
Posted by J-Canuck at 3:57 PM